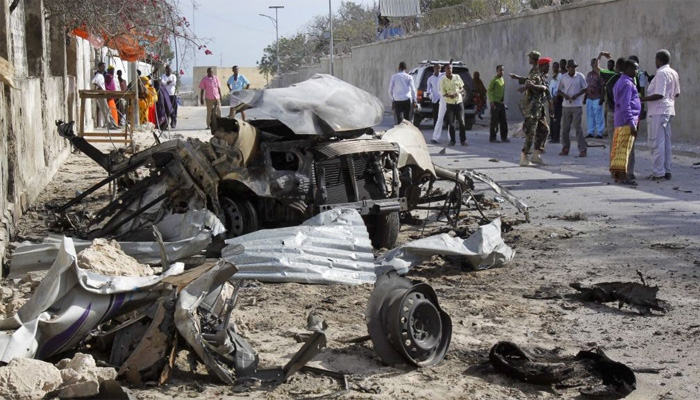 A car-bomb blast hit the heart of Somalia’s capital Monday, killing at least five people and leaving 20 others injured, police said. The Al-Shabab group has claimed responsibility for the blast in a statement on its website.

Mostaf Abdi Abshir, a journalist with Radio Shabelle, told Al Jazeera the vehicle laden with explosives detonated near a coffee shop opposite of the immigration directorate.

Also speaking on the blast, Major Aden Ibrahim, a police official said, the attack was carried out by a suicide bomber.

Abdikadir Abdirahman, the Director of AMIN ambulances, said his organisation had removed eight bodies from the scene and taken more than two dozen wounded to hospital. Among the casualties were senior security officials. “The death toll may rise,” he said.

“We are behind the blast,” Sheikh Abdiasis Abu Musab, the group’s military operations spokesman, told Reuters. “The targets were police, intelligence, military officials and immigration workers.”

Al-Shabab was forced out of the capital and other major urban areas in Somalia by national and African Union multinational forces, but it continues to carry out deadly bombings and attacks in Mogadishu and elsewhere.

Targets have included hotels, military checkpoints, and the presidential palace.

Earlier on Monday, three Somali soldiers on an ordnance-clearing mission were killed after a roadside bomb planted by the insurgents exploded 90km north of the capital.

Somalia has been mired in conflict since 1991, when clan-based warlords overthrew Dictator Siad Barre and then turned on each other.