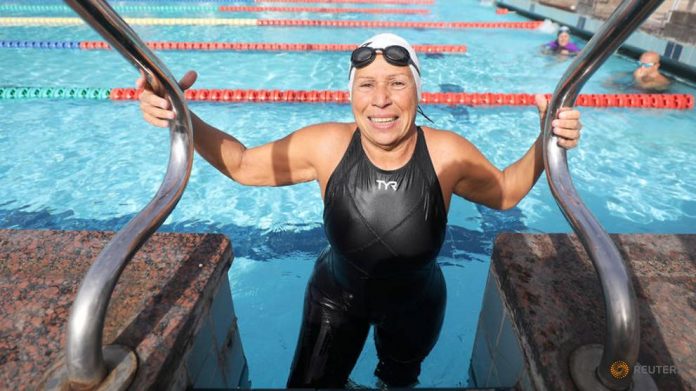 “By my retirement age, Egypt began featuring seniors’ international championships, so I immediately participated. For 60 years I had been waiting for the opportunity to participate in a championship. It has been inside me for 60 years, waiting to be released. I entered the championship, thank God, with great determination and extreme training. There was no other way, as I wanted to reach the international level. I did not want anyone to beat me. After all, I was competing in the name of my country.”

Despite swimming since she was 4, Ghorab won her first medal in an international contest at the age of 72. Today at 76, Ghorab still puts on a swimming suit and trains five times a week. Age is no obstacle, “What obstacle?” she said. “I am proving to you and to everyone that age is no obstacle if you have the will, and if you have positivity in life.”

At age 14, she won an Egyptian swimming championship and was featured in a local magazine, but her dream had always been to represent her country abroad.

After she turned 18, Ghorab says she had to stop competing because Egypt did not have championships for swimmers above that age at the time, but she kept training. It was only in 2005 that she was finally able to return to competitive swimming.

In 2014, she participated in her first international competition in Canada, winning two medals. The next year she danced at the podium in Russia after getting two bronze medals at age 73. Before competing internationally, Ghorab had to go through “extreme training”, she said, adding but “there was no other way.I had a dream, of participating in international championships in order to raise the flag of my country abroad,” said Ghorab.

Her swimming coach Haytham Sabry described her as a woman who has “the heart of a 20-year-old”. She has determination in freezing cold or in hot weather. She still shows up every day to train,” he said.

Ghorab, who is also painting, said she only trains in Egypt with help from Egyptian coaches. Her next competition will be in Germany, she said. There is no championship that she does not wish to participate in, Sabry said.