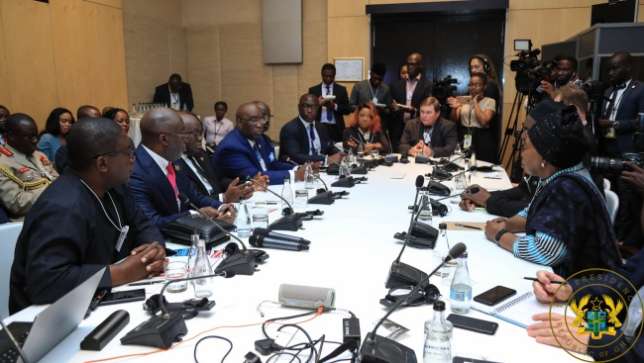 The Minister for Railways Development, Hon. Joe Ghartey, MP, on behalf of the people and Government of Ghana, has signed a Memorandum of Understanding with the Africa Investment (Ai) SkyTrain Consortium, based in South Africa, for the construction of the Accra Sky Train Project.

With Accra experiencing ever-increasing road traffic congestion, with its detrimental effects on economic activity, pollution and the quality of life, the SkyTrainÔ project, Hon. Joe. Ghartey emphasized, is the solution to these problems.

“There is confidence in the project. The promoters (Ai SkyTrain Consortium) are very serious, and that is why we invited the President, himself, to witness the signing. This should assure the investors that Government is solidly behind it. The economics of this project are also good. We are very excited about the prospects,” he said.

The MoU was signed on Tuesday, 8th November, 2018, on the sidelines of the ongoing Africa Investment Forum, being held in Johannesburg, South Africa.

“Today, we have signed a MoU which will last nine (9) months, where they (Ai SkyTrain Consortium) can do their feasibility into detail. After which, we have given ourselves 45 days to take our concessionary agreements for approval by Cabinet and also by Parliament. By January 2020, we should start the construction of the project,” the Railways Minister said.

South Africa’s Deputy Minister for Transport, Sindisiwe Lydia Chikunga, who was present at the signing ceremony stated that “we are very excited, and we hope that, in due time, we will witness the construction in 2020. We wish you all the best in the feasibility period.”

On his part, President Akufo-Addo stated that after the deterioration of Ghana’s rail infrastructure over the years, “it has become a priority of our government to rehabilitate, revive and expand, and get us a railway infrastructure that is fit for purpose.”

The exciting bit about the project, he explained, is that “it is a good example of intra-Africa co-operation. It is Ghana-South Africa co-operation, meeting and coming together to deal with the problem of urbanization, which is facing all our countries.”

The President added that Accra, with a population of some 250,000 at independence, now has 6 million people, and the Accra SkyTrain Project, he added, “is a very, very efficient solution to it. I am happy that is the result of co-operation between our two countries.”