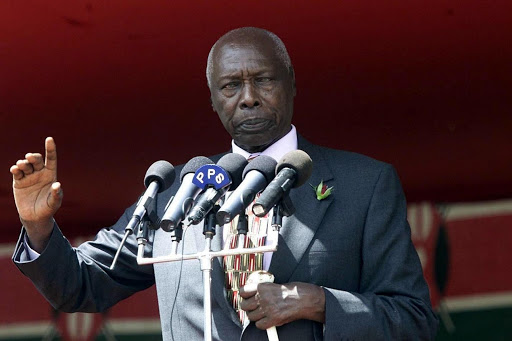 According to the Presidential declaration statement by President Kenyatta, he passed on Tuesday morning at 5:20 AM at Nairobi Hospital.

Having sent condolences to the family, the President said in his statement:

“It is with profound sadness and sorrow that I announce the passing of a Great African Statesman, H.E. Daniel Toroitich arap Moi, the Second President of the Republic of Kenya. His Excellency the Former President passed on at the Nairobi Hospital in the presence of his family.”

To this end, the nation will observe national mourning and the national flag will be flown at half-mast throughout the state and other facilities of the Republic of Kenya abroad from the dawn of February 4, 2020 until sunset on the day of Moi’s burial, as ordered by the President.

Following the death of the late president, a number of global leaders including African heads of state have offered their condolences to the Kenyan people.

Amongst others are the East African President; Yoweri Museveni of Uganda and John Pombe Magufuli of Tanzania who took to social media to eulogise late Moi on hearing the news.

Moi came to power in 1978, upon the death of President Jomo Kenyatta, having been vice-president until then.