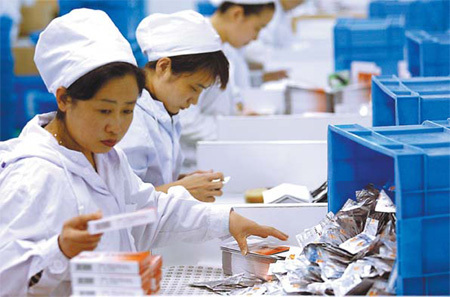 China is on the verge of advancing three innovative cancer therapies toward pivotal trials that could position them for winning U.S. Food and Drug Administration marketing approval, according to a recent report in The New York Times. While global pharmaceutical companies are taking note, that’s something African nations should take pay attention to as well.

Such a feat may not seem that extraordinary, but consider, as the newspaper reported, China hasn’t produced a drug for the global pharmaceutical industry since the 1970s, when a Chinese scientist discovered the malaria drug artemisinin.

For China to get to this point is no small feat. It reflects a long-term and multifaceted approach to develop a high-value innovation economy. It reflects a commitment to building everything from basic infrastructure to world class educational and research institutions, developing an entrepreneurial culture and regulations to foster it, and attracting home expatriates who brought back knowledge gleaned from working for multinational companies.

Though China still has issues to address, it has made significant progress and has been able to attract large multinational drug companies to invest in China and establish a presence there. There are lessons here for African nations that may want to replicate China’s success. To do so will require embracing science and technology as fundamental to building a knowledge-based and innovation driven economy. Doing so will help Africa address problems of highest urgency to its population, provide opportunities for an emerging generation of African professionals at home, and attract expatriates who have worked in global business enterprises to return home.

Investment in R&D in Africa is low. Just 1.3 percent of the total money spent globally on R&D is spent in Africa, according to the African Academy of Sciences. The proportion of researchers in the African population is 28 times lower than the proportion in the United States and the percentage of Africans pursuing graduate study is three times lower than the global average. The academy also notes a lack of facilities and equipment needed to conduct cutting-edge R&D.

There are efforts underway in Africa to change the science and technology landscape. In June 2014, the 23rd Ordinary Session of African Union Heads of State and Government Summit adopted a 10-year Science, Technology and Innovation Strategy for Africa. The strategy identified four mutually reinforcing pillars as prerequisite conditions for its success. These pillars included building and/or upgrading research infrastructures; enhancing professional and technical competencies; promoting entrepreneurship and innovation; and providing an enabling environment for STI development in the African continent.

Though investment in research remains relatively low by the standards of developed nations, African nations are working to change that. For instance, The Kenya National Research Fund has stepped up its funding and the nation now has a goal of 2 percent of the nation’s GDP for the research fund.

And then there is Coalition for African Research and Innovation, an alliance of African science leaders and international funders who have joined forces to catalyze investment in research and innovation. CARI is working to allow African nations set research agendas and make investment in science and R&D that can drive the creation of new start-ups, raise productivity, and help lift people out of poverty.

CARI, which is an initiative of the Alliance for Accelerating Excellence in Science in Africa, is also working to make R&D more efficient by addressing the fragmentation of African science and developing a robust network of researchers who can collaborate and coordinate their work.

The loss of well-educated professionals has restrained economic growth in Africa. One in nine Africans with a tertiary education—some 2.9 million people from the continent—were living and working in developed nations in North America, Europe, and elsewhere, according to a 2013 report from the United Nations and the Organization for Economic Co-operation and Development. The search for better opportunities, stable political environments, and the escape from violent conflicts drove migration.

Despite popular misconceptions about Africa, it often educates its best and brightest for the benefit of developed nations. For instance, sub-Saharan African nations spent nearly $2.2 billion on subsidies to educate doctors who migrated to Australia, Canada, the United Kingdom and the United States, subsidizing the healthcare needs of developed nations, according to a 2011 study in the British Medical Journal.

For Africa to realize its potential, though, government and industry will need to work together to attract home African professionals who have left, retain young talent, and invest in science and technology to build its innovation sector. It will also need to reverse its long-standing brain drain.

“The number of skilled people and professionals our continent has lost over the decades is truly frightening. Since 1990, Africa lost 20,000 academic professionals who left their countries [and] 10 percent of highly skilled information technology and finance professionals have also left the continent in recent years,” Mbeki said 2015 speech in Johannesburg, noting that it is estimated that more African scientists and engineers live and work in the United States and United Kingdom than anywhere else in the world.

Africa is by no means alone in seeing the loss of a highly-educated talent pool to developed countries. But in places like China, where economic growth has been dynamic, more and more educated professionals, who left their homeland for opportunities elsewhere, have been drawn back. They have brought with them new skills, networks of global business contacts, and innovative ideas. Africa should embrace this talent pool, welcome it home, and put into place incentives to put their skills and knowledge to work building the economy.

There are initiatives working to attract African expatriates home, such as New Partnership of Africa’s Development and the global headhunting firm Homecoming Revolution. More, however needs to be done to attract talent home and retain a new generation in its universities today.

African nations should take note of China’s example and let people across the globe know that for people with world class talent, it has opportunities to match. Africa should open its arms to not just its expatriates, but to talented professional from developed nations who have a passion for the continent, vision for its potential, and the drive to help build its future.

Dr. Menghis Bairu is founder and CEO of Proxenia Venture Partners, which is seeking to accelerate startups in Africa by actively investing and providing technical support to African scientists. He is a native of Eritrea and is involved in various philanthropic and private-public investments across Africa.