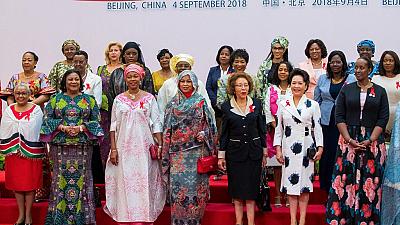 First Lady Jeannette Kagame of Rwanda along with her counterparts attended a key conference on HIV/AIDS prevention and control themed: “Join Hands for a Future Free of AIDS.”

The conference, which took place on the sidelines of the Forum on China-Africa Cooperation 2018 (FOCAC), sought to reflect on the milestones achieved and to identify and address the remaining gaps in the push towards zero new infections.

First Lady of Burkina Faso, Sika Bella Kabore speaking on behalf of the Organization of African First Ladies against HIV/AIDS (OFLA), emphasized that when it comes to HIV/AIDs, Africa remains the most affected with an upsurge of the epidemic in Central and West Africa. She called on her fellow First Ladies to strengthen advocacy in order to ensure the effective mobilization of resources needed to keep threats on the progress achieved so far at bay.

Bella Kabore reiterated OFLA’s commitment to fight HIV and end AIDS by 2030. She called for more support in ensuring access to public health efforts, medical facilities for HIV/AIDS and Cancer prevention treatments adding that such elements need to be included in FOCAC key areas.

Margaret Kenyatta of Kenya representing the East African Community, called for all stakeholders to leverage available data in order to strengthen universal health coverage, saying that continued exchange of lessons learned is highly needed. In this light she applauded OFLA initiatives, such as the ‘Free to Shine Campaign’ that seeks to end new infections in children and keep mothers alive.