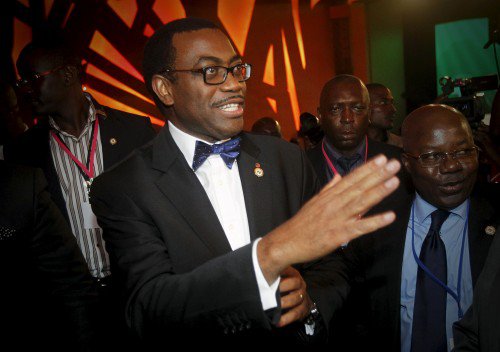 African governments in the grip of Eurobond fever should look closer to home to secure financing vital to their economic development as borrowing costs on international debt markets rise, the president of the African Development Bank said.

Africa has seen a boom in dollar-debt issuance over the past decade as countries have sought to borrow, often for costly infrastructure projects, at a time when investors in the United States and Europe sought out higher yields in emerging markets.

Over 20 African nations have now sold at least one Eurobond, Akinwumi Adesina told Reuters in an interview late on Friday, roughly double the number back in 2004.

“It’s all well and good when the interest rate environment is quite accommodating,” he said. “But as the Federal Reserve rates go up and you begin to see a lot more movement of money out of emerging markets, you’ll have a tightening of that capital market.”

Adesina, a former agriculture minister in Nigeria who is completing his first year as head of the Abidjan-based institution, said many African countries have ignored the potential for borrowing cheaply on domestic and regional debt markets.

Africa is also sitting atop vast unexploited capital, including $334 billion in pension funds and sovereign wealth funds worth $164 billion.

“These are pools of capital that need to be tapped for Africa’s development,” he said.

“We’re helping countries issue bonds in domestic currencies to raise money and also with the pension funds to create the regulatory environment that allows them to have asset classes in which they can invest.”

Exploiting new sources of financing is becoming more pressing due to the economic problems in Africa’s oil and mining-dependent nations brought on by the steep declines in commodities prices.

Those governments are now facing budget deficits, stagnating or contracting growth and in some cases currency depreciation that increases the cost of servicing and paying off existing dollar-denominated debt.

Once such country, Ghana, issued a $750 million dollar bond earlier this month. Another, Nigeria, plans to issue a $1 billion bond in December.

“There’s nothing wrong with taking debt. It really depends on how you raise it and what you raise it for,” Adesina said. “But if you are raising money simply to be able to pay back old debt, that may be an issue.”

“They may raise Eurobonds but it’s not just that,” he said. “All these countries are investing very well in infrastructure, which is very important for boosting growth. Many of them have a very stable macroeconomic environment. Many of them are encouraging private sector investment.”

But the key to steady, long-term development lies not in how countries weather the bad times but rather how they prepare when business is good, he said.

Referring to Senegal and Mauritania, two small economies that may be on the cusp of an oil and gas boom following recent offshore discoveries, Adesina said their governments needed to avoid the mistakes of other African producers.

He urged them to negotiate advantageous royalty arrangements and tax regimes before the first barrel of oil is pumped and to then ensure the money is spent the right way.

“They should invest a lot of that money in human capital development, in infrastructure that’s going to enable growth,” he said.

“It’s not always going to be rosy … So save for a rainy day. Setting up a sovereign wealth fund is a great way … And use the resources to further diversify the economy.”