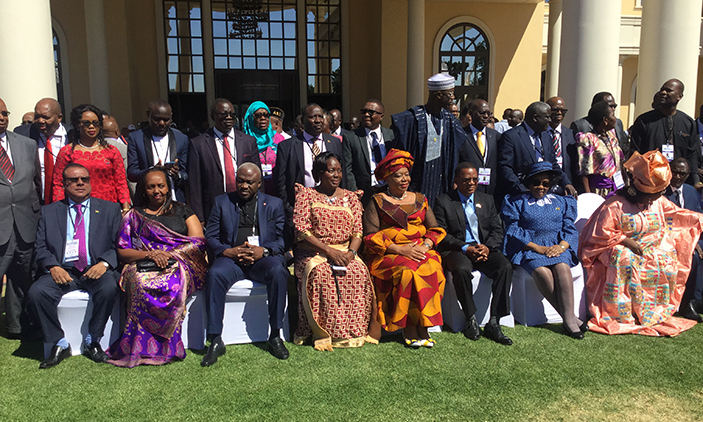 Legislators from across the African continent have been urged to take a lead in ensuring that there is security in their respective regions.

They have also been urged to make laws that govern the defence and security sector, the procurement of arms and, foster accountability and disclosure on the deployment of the military, as well as developing guidelines to ensure achievement of security.

This call was made to Members of Parliament at meeting in Gaborone, Botswana for the 49th Commonwealth Parliamentary Association (Africa Region) Conference.

The conference was held under the theme, ‘The role of African Parliaments in fostering national and regional security’.

Opening the Conference, the Vice President of Botswana, Slumber Tsogwane said that there is need for respect of human rights, justice and rule of law for a peaceful and secure Africa.

“Issues of security by their nature, require concerted effort and parliaments as pivotal democratic institutions, have a bigger role to play in terms of providing direction and what can be done to foster and promote international security,” he said.

Tsogwane added that security is measured as a reduction in the incidents of violence and critical as a pre-condition for development. He noted that high unemployment, lack of equal opportunities, poverty, lack of good governance and corruption are the leading causes of violence in Africa.

“Parliament is a principle facilitator in achieving national and international goals and aspirations especially equity and economic development. Therefore, a strong Parliament on the African continent has become the embodiment of empowerment, good governance and strategic planning,” Tsogwane added.

The Chairperson of the Commonwealth Women Parliamentarians, Angel Didiza, said that gender based violence continues to pose challenges towards peace and security for women in homes and society as a whole.

“It is incumbent upon us Parliamentarians to find solutions in which we can actually deal with this challenge. I know that women together can make a difference,” Didiza said.

Speaker Rebecca Kadaga welcomed the move to have Parliaments involved in peace efforts saying that, ‘youth unemployment as a source of insecurity needs to be addressed’.

In a related development, Parliament of Uganda will next year host the Commonwealth Parliamentary Conference which brings together Members of Parliament from former British colonies.

Addressing the sub-regional meeting for Eastern Africa region, Kadaga said that Uganda has started the preparations for the meeting in Kampala.

“We want to assure you that the committees have been set; we have proposed some dates in September which awaits confirmation from the headquarters. You are all welcome,” Kadaga said.

The CPA Africa Region Conference that started on 13 August will close on 22 August 2018.