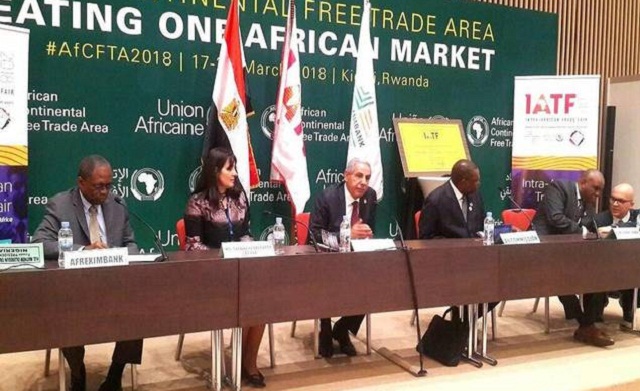 Africa’s economic landscape is looking very promising indeed, thanks to investors who signed over $27billlion investment deals with countries within the continent.

The event was at the inaugural Intra-African Trade Fair (IATF) 2018 holding in Cairo, Egypt, where the IATF Deals Processing Centre recorded transactions in excess of the initial target of $25 billion in signed trade deals, reaching $27 billion by the end of the weekend.

Organized by the African Export-Import Bank (Afreximbank), in partnership with the African Union Commission (AUC) and hosted by the Government of Egypt, the IATF is being attended by almost 1,100 exhibitors showcasing their goods and services to an estimated 70,000 visitors at the Egypt International Exhibition Centre. It is being accompanied by the IATF 2018 Conference.

An elated Afreximbank President Prof Benedict Oramah while responding to the investment drive said, “We are proud to witness this indication of what the African Continental Free Trade Area (AfCFTA) Agreement can yield for intra-continental trade. By bringing together buyers and sellers under one roof, in the first intra-African trade fair of its nature on the continent, Afreximbank is succeeding in facilitating the transformation and integration of African economies.”

The second day of the trade fair featured conference engagements on Improving the Environment for Enhancing Intra-African and South-South Trade Financing; Making Intra-African Trade work for Business–Views from Practitioners; and the Creative Africa Exchange (CAX) Summit.

The CAX Summit is a flagship event launched at IATF with the purpose of serving as a vehicle for Africa to grow its knowledge and capacity for intra-continental trade within the creative and cultural industry. The event opened with a performance by Nigerian singer, WAJE, and featured special guest perspectives from creative industry greats such as D’Banj, an IATF 2018 ambassador, award-winning musician and CEO of GOOD Music; Rita Dominic, also an IATF 2018 ambassador, award-winning actress and producer; The Audrey Silva Company; Abiola Oke, a Publisher and CEO of OkayAfrica; and award-winning actress Mumbi Maina.

In an address at the CAX Summit, Prof Oramah questioned the lack of African participation globally in the arts and why Africa continued to play in the periphery “when Africa is art and Africa created art”. He highlighted the artistic achievements of Africans over the centuries and encouraged IATF participants to be active in the transformation of the creative industry as part of a holistic approach to transforming all industries in Africa.

The IATF ends on Monday with plans to host the next edition in 2020.