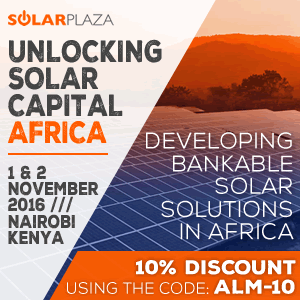 As prices for solar components go down and new innovative business models arrive, the off-grid solar market in Africa is seeing a huge growth.

With only 290 million out of 915 million people in Africa having access to electricity, action is needed to provide clean and reliable energy for all. While at the same time a huge opportunity for developers and investors in Africa’s energy sector exists.

Being endowed with high concentrations of sunshine, the continent seems suited for solar energy. Even though traditionally, investors’ interest has focused mostly on larger on-grid solar power generation projects, investments in off-grid solar in Africa have grown enormously in recent years.

According to Michael Franz of the Africa-EU Renewable Energy Cooperation Programme (RECP), a Strategic Partner of the upcoming Unlocking Solar Capital Africa, solar can broadly be categorized in four key market segments: On-grid (large scale), Captive Power (small to medium on-grid), Off-Grid (mini-grids) and Off-Grid (standalone systems). Of which the last market segment is currently ‘going through the roof’ in Africa.

Off-grid standalone systems refer to portable lights and solar home systems. A good example of the former being the award winning Waka Waka solar lights. Compact products with an integrated solar panel and strong LED light that can also be used to charge mobile phones. These products have created a huge impact in providing affordable, clean and safe lighting to people at the bottom of the pyramid.

Solar home systems usually consist of a solar panel, charge controller, battery, LED lights and possibly a number of appliances like TVs and radios. Over the past decade, there has been a steady decline in the prices of solar panels – because of economies of scale in China – as well as an increase in efficiency of light bulbs and other DC appliances. Still, with prices for small solar home systems (3 lights and phone charging) starting from around $100, they are often too expensive for many of the poorest people in Africa, if they were to acquire the product through an outright purchase.

To grant these people access to such systems, some form of consumer credit is required.

In recent years different models have been developed to overcome this hurdle; with Pay-as-you-go (PAYG) receiving the most attention.

The PAYG modality allows off-grid customers in developing countries in Africa to obtain a solar home system for a marginal initial down payment. The rest of the payments are made in daily, weekly or monthly installments and in many cases through mobile banking.

Some firms choose for a ‘pay-to-own-model’, where customers pay off the system in 12-36 months. Other firms prefer a ‘lease-model’, where the firm maintains ownership of the system throughout. Examples of PAYG companies include the start-ups Mobisol and Off-Grid Electric (OGE). Mobisol’s CEO Thomas Gottschalk described the interest in this sector as: ‘a huge hype, but a justified hype’. The company will soon be celebrating its 40,000th customer in Rwanda and Tanzania.

Partnerships with mobile phone companies offering mobile banking services to large parts of society in East Africa have been vital. In using this mechanism, customers can pay the solar companies through this SMS based service. Once payment is received the system is switched on. It will be remotely switched off by the firm, in case no payments are made. When a customer fails to make the payments over longer duration of time, the company will repossess the system. In the process the firms are building a valuable credit history for their successful customers.

The value proposition that is being offered is also quite different from the case of on-grid solar. The firms offer their customers a system that is cheaper than daily spending on kerosene for lighting; targeting off-grid households, ‘bad-grid’ households and shop keepers.

Since payback times for systems are long and up-front investment are high, access to finance is essential.

Luckily, large investors are starting to show their interest in these firms. Bill Lenihan, CFO / Head of Business Operations of OGE, mentioned that his firm has recently raised $70 million in capital to support the growth of their PAYG solar home system operations in Tanzania.

ItamarOrlandi, Head of Applied Research at Bloomberg New Energy Finance, a Content Partner of the upcoming 2-day conference in Nairobi, presented some of the outcomes of their off-grid solar market trends report. With market penetration of only 7%, he described the off-grid solar sector as: ‘an open field’. His analysis shows a 33% compound annual growth rate (CAGR) in the coming years. The PAYG firms accelerated the flow of capital into this sector, which has seen ‘a 15-fold increase in investment in the last three years’.

To find out more about how to develop bankable solar solutions in Africa join Unlocking Solar Capital Africa, this November 1-2 in Nairobi: www.unlockingsolarcapital.com Readers of African Leadership Magazine can get a 10% discount on the conference ticket using the promotional code ALM-10