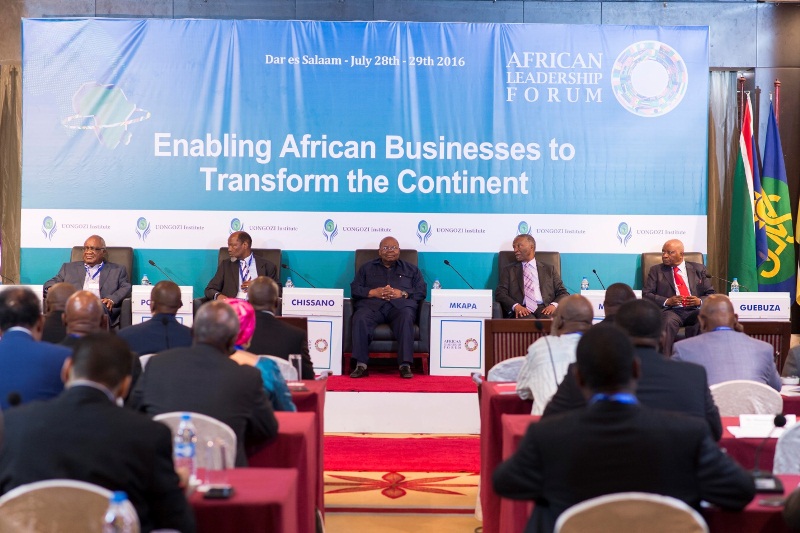 Former African Heads of State, government and business leaders of the African Leadership Forum 2016 underscored strong leadership as the key to unlocking the potential of African businesses to drive development, pointing towards the need for African leaders to work collectively as a continent to promote inclusivity, peace and stability, as well as in negotiating pragmatic trade agreements for the benefit of the majority of the continent’s citizens.

The African Leadership Forum 2016, hosted by the former president of Tanzania HE Benjamin William Mkapa and organized by UONGOZI Institute was held on the 28th and 29th July, in Dar es Salaam. The Forum, which is in its third year now, convened a total of 5 former Heads of State, several heads of regional institutions and over 250 leaders from government, business, academia and civil society from all over Africa under the theme of, “Enabling African Businesses to Transform the Continent.”

In his keynote speech, former president of the Chamber of Mines of South Africa, Mr. Sipho Nkosi urged African leaders to focus on transforming their countries into economic powerhouses by putting African citizens first. “Why is it that we are still poor in Africa, that our people still sleep hungry and our businesses lack innovation?” he queried.

Mr. Nkosi presented that Africa needs a selfless leadership that would put in place implementable policies with a vision of growth and advancement of society to unleash the continent’s potential.

“Leaders in businesses and government need to have love and passion for themselves and their own people,” he explained, “A vision should start with looking at what African countries have, where their respective competitive advantage lies, and using that to realise transformation.”

Giving his opening remarks, former President Mkapa said that African people must drive themselves to bring development in their countries, noting that no outsider will come and do so for them.

“This year’s theme is ‘How we can enable African businesses to transform the Continent’, how can it be done more quickly and more sustainably? As you know, we have agenda 2063, that has set goals for a prosperous Africa based on inclusive growth and sustainable development… how we get there will depend on how the people take up that challenge,” he explained.

“The land can be employed for the purpose, the people that we have can be motivated to take the responsibility, good policies enable people to use land for their development and good leadership will build the path for sustainable development,” he noted.

On his part, Former South African President H.E Thabo Mbeki emphasized the need for governments to put in place the necessary systems for businesses to thrive on the continent.

“Governments in Africa must create focal points for businesses in various sectors to ensure vertical understanding between the private sector and the state,” stated President Mbeki.

Former Ghana Finance Minister Hon. Kwesi Botchwey said that there were three main challenges facing the continent, listing them as lack of a stable and lucrative environment economy, infrastructure and policy implementation.

“We need to look at our cultures, the way we perceive businesspeople and those who are rich, as well as build a consistent tendency of implementing what we have in our policies,” he said.

Regarding Africa’s ambitions to industrialise, African Development Bank Senior Vice-President Frannie Leautier pointed out that there are still significant investments to be made, including in the development of knowledge and skills, investments in research and development, and investments in advancing science and technology in general.

Former Mozambican President H.E Joaquim Chissano challenged the private sector in the continent to tell governments what needs to be done in order for their businesses, and countries they operate in to prosper.

“From my experience, I had no idea about how to do business,” he said, “so I invited business leaders to give me their views on what to do. The dialogue between the two parties is very important in order to create an entrepreneurial culture.”

The African Leadership Forum 2016 builds on the success of the inaugural dialogue in 2014 on Meeting the challenges of Africa’s transformation and the dialogue in 2015 on Moving towards an integrated Africa. This year’s event aimed to provide a platform to deliberate on the obstacles preventing African businesses from flourishing, and what needs to be done about them.

The public plenary was followed by three closed sessions for a core group of nearly 50 African leaders on “Making African Businesses Inclusive”, “Enhancing Businesses through Regional Integration”, and “The Impact of Trade Agreements on Business and Private Sector Development”.

This year, the African Leadership Forum also featured a parallel session for youth leaders which took place on 28 July, 2016, where they discussed issues of inclusivity and regional integration and presented the outcomes of the discussion to the Forum on the final day.

An official statement, speeches and the proceedings report from the Forum will be made available soon.