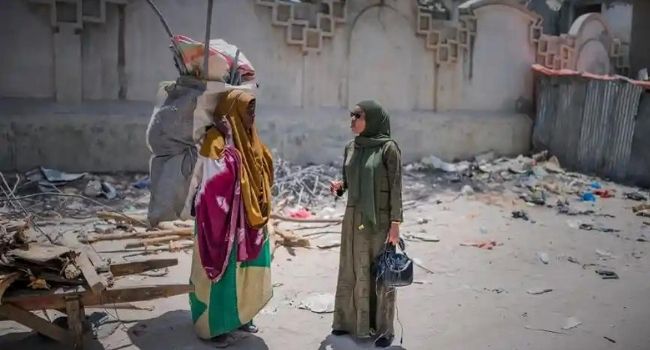 The first all-women media house in Somalia has been launched, creating a rare opportunity for female journalists in the country to research and publish stories they want to tell.

Led by one of the few female senior news producers in the country, the team of six will produce content for TV, radio and online media on gender-based violence, women in politics and female entrepreneurs.

Crucially, they will have the autonomy to make editorial decisions.

“We want to cover these issues and challenge societal beliefs that women should stay at home,” said the editor-in-chief, Nasrin Mohamed Ahmed, who has worked as a journalist for 12 years and is a founding member of the Somali Women Journalist Organisation.

In Somalia, women working in the media face multiple challenges, from being ignored and denied promotions to bullying and sexual harassment. “Men think you should come in, read the news and go home,” said Ahmed, 27.

Bilan’s deputy editor, Fathi Mohamed Ahmed (no relation), 25, said sexual harassment was rife in the media sector. She has had to develop tactics to ward off advances from male colleagues.

“The biggest challenge facing female journalists in Somalia is abuse, especially from male journalists,” she said. “They offer to help you but only if you give them something in return.”

Ahmed added: “Men have said things to me like, ‘you’re beautiful, I like your body,’ and it was only when I said I was engaged that they stopped.”

Bilan, which means bright and clear in Somali, will be based in the capital, Mogadishu, at Dalsan Media Group, one of the country’s largest media organisations.

It will publish news and features and provide training and mentorship from established Somali and international journalists, including the BBC’s Lyse Doucet and Razia Iqbal, Channel 4’s Lyndsey Hilsum and Mohammed Adow at Al Jazeera. Six-month internships will be offered to the best final-year female journalism students at two universities in Mogadishu.

Funded by the United Nations Development Programme (UNDP), the project is a year-long pilot. Still, Jocelyn Mason, UNDP’s resident representative in Mogadishu, is confident it will become a permanent set-up and may also be extended into Somalia’s regions.

“We hope this will be a gamechanger for the Somali media scene, opening up new opportunities for women journalists and shining a light on subjects that have been ignored, particularly those that are important for women,” said Mason.

The team at Bilan includes a woman who is leaving her family for the first time to work in Mogadishu.

“I come from a rural clan which does not want any of its members to become journalists, especially young women,” said Shukri Mohamed Abdi. “We come from the bush, where the concept of being a journalist does not exist.”

Another member of the team, Kiin Hasan Fakat, grew up in one of the three Dadaab refugee camps in Kenya. She hopes Bilan will provide a safe and inspiring environment for women to tell their stories.

“Ask any Somali who they depend on. They will always say ‘my mother’. Everything in Somalia depends on women – the economy, the home, the children, the family.”