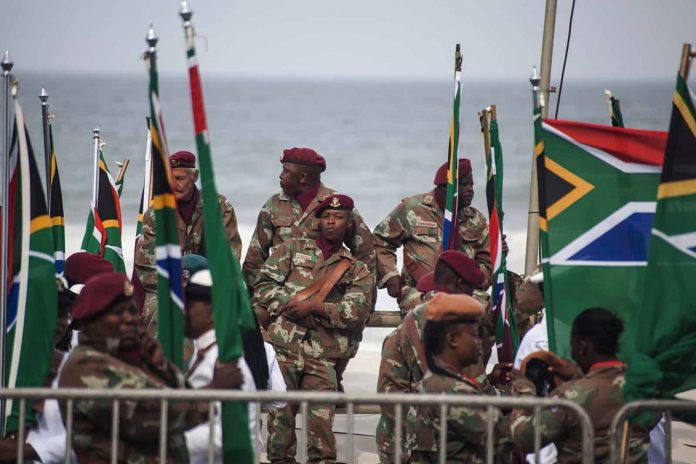 The SS Mendi tragedy is remembered as the deadliest maritime disaster in South Africa’s history and exemplifies the cruel loss of African life brought about by a contentions European war effort . This year, the SS Mendi bell was handed over to the South African National Defence Force (SANDF) for safe keeping. During the inauguration ceremony of Armed Forces Day 2019, President Cyril Ramaphosa presented SANDF General Solly Shoke with the prized possession. This marked the beginning of the official military parade, which, this year, took place on Marine Drive in Table View, Cape Town.

The climatic parade was preceded by a series of smaller yet equally impressive events across the Mother City. While these ‘war games’ garnered a considerable amount of controversy – particularly the night performance in Muizenberg, which was accused of destroying marine life and damaging the beachfront – thousands of spectators flocked to activation areas to be wowed by the SANDF’s displays.

Following the ceremonial rituals and an impressive display by the South African Airforce, troops took to the streets in precise formation. Regiment upon regiment marched adjacent to the beachfront, guided by military bands which kept them in time. The infantry, in their customary camo regalia, were followed by the navy precision – shining bright in all white.

The day’s activities ended with a lengthy mechanised procession. A stream of armoured vehicles – tanks and personnel carriers – trundled down the road to the cheers and applause of onlookers. Armed Forces Day, which was implemented by former president Jacob Zuma in 2013, has been held in seven provinces following the Cape Town event. According to the SANDF, 8 500 troops from all over the country made their way down to Cape Town for the week’s events.