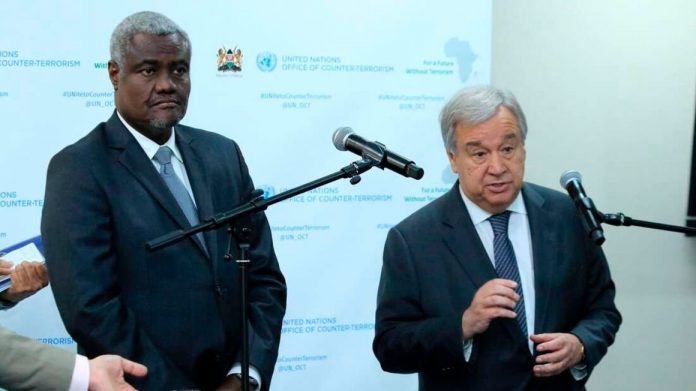 The African Union, AU, and the United Nations have backed an eastern Africa initiative to bring peace to the Democratic Republic of Congo (DRC), boosting chances for a local solution to the conflict.

Both the continental body (AU) and the UN say they support the latest bid by the East African Community (EAC) to bring armed groups to dialogue with the Government in Kinshasa, as well as the formation of a regional force to counter rebel groups who will refuse to negotiate for a political solution.

Moussa Faki Mahamat, the Chairperson of the AU Commission, said on Tuesday he supports the initiative that came out of the Second Heads of State Conclave on the Democratic Republic of Congo (DRC) in Nairobi, “particularly the decision to immediately deploy a regional force to restore peace and stability in the DRC.”

“Furthermore, the Chairperson welcomes the convened 1078th meeting of the AU Peace and Security Council of 19 April 2022 on the outcome of the 10th Regional Oversight Mechanism Summit held in February 2022 in Kinshasa.

“And reaffirms AU’s continued commitment, to the full implementation of the Peace, Security and Cooperation Framework Agreement for the DRC and the Region, as one of the Agreement’s guarantors,” he said.

The agreement is a 2013 document signed by DRC and all its neighbours—Angola, Burundi, Central African Republic, Congo, Rwanda, South Africa, South Sudan, Tanzania, Uganda, and Zambia. They vowed to support institutional rebuilding in the DRC, including a decentralised but consolidated state authority and a promise not to harbour rebel groups and war crimes suspects involved in conflicts in the DRC.

Most of that agreement has not been implemented. But last week, Kenya’s President Uhuru Kenyatta, the current chairman of the EAC, hosted a meeting with leaders who vowed to “immediately” create a regional force to deal with all armed groups who refuse dialogue.

The actual troop contributors were not immediately named.

But first, the meeting—attended by Presidents Kenyatta of Kenya, Yoweri Museveni of Uganda, Felix Tshisekedi of DRC and Evariste Ndayishimiye of Burundi, and Rwandan Foreign Minister Vincent Biruta who represented President Paul Kagame—agreed to have armed groups hold dialogue with the Government of DRC. Kenya offered to facilitate the travel and stay of the armed groups’ representatives in Nairobi.

“Towards this end, the meeting directed that planning for such a force commence with immediate effect with the full consultation of relevant authorities in the region,” said a joint communique issued after their meeting in Nairobi on Thursday.

“All armed groups in the DRC participate unconditionally in the political process to resolve their grievances. Failure to do so, all Congolese armed groups would be considered negative forces and handled militarily by the region,” the communique said.

On Saturday, Antonio Guterres, the UN Secretary-General, said the UN “fully supports the initiative by the East African Countries to bring peace in the eastern Democratic Republic of the Congo and the neighbouring countries.” He spoke following a phone call with President Kenyatta last week.

Although both sides began talks on Saturday in Nairobi, there were clashes between a faction of the M23 group and government forces (FARDC), leading the Government to refuse dialogue with the group until they cease violence.

A dispatch from the meeting said the Government accused the M-23 rebels based in Uganda of launching attacks in Bukasa, North Kivu.

“Consequently, the delegation revealed to the meeting that they have instructions to withdraw from any dialogue with the M-23 (Uganda).

“He nevertheless clarified the readiness to continue with the dialogue attended by other armed groups, other than the M-23 group based in Uganda. The allegations were quickly rebuffed by the representative of M-23 based in Uganda who in turn accused the Government of provocation,” a dispatch said on Saturday.

Since last Friday, at least 15 armed groups have been in dialogue with the Government. They include Gumino, Raia Mutomboki, FPDC, Twiraneho, UPSP and the three factions of the M23 group, which had earlier signed a peace deal with the Government but which claimed the agreement was never honoured.

“The goodwill and enthusiasm demonstrated during today’s deliberations will be given further impetus by the arrival of nine (9) more groups on 25 April 2022,” said Macharia Kamau, Kenya’s Principal Secretary in the Foreign Affairs Ministry.

“There is big optimism that the parties to the dialogue will contour with proven dedication and commitment, guaranteeing progress towards a durable solution.”