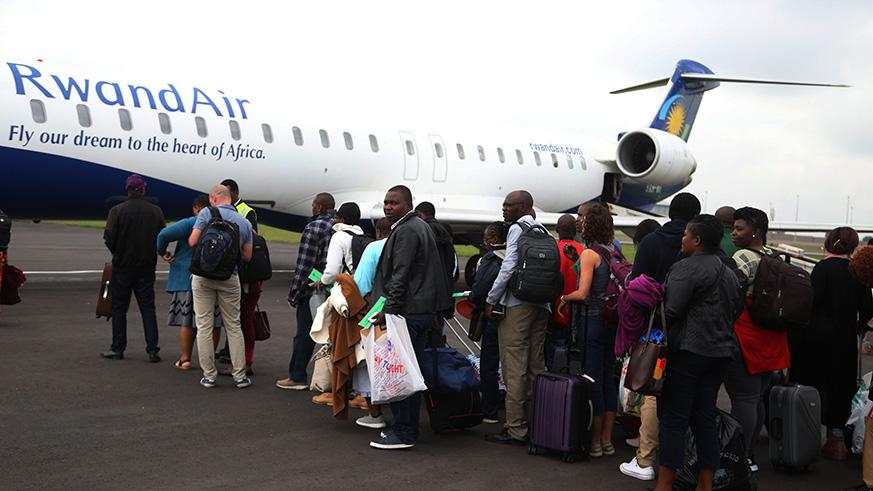 The number of people visiting or transiting through Rwandan airports is set to increase to over one million this fiscal year, according to projections from the Ministry of Infrastructure and affiliated institutions.

According to figures presented by the Permanent Secretary in the Ministry of Infrastructure, Christian Rwakunda, aviation traffic will rise to 1,151,300, from 926,571 passengers.

The figure includes those coming to Rwanda or transiting through the country to access other destinations.

The number has been on the increase given that those who had visited or transited through the country in 2016-17 were 747,761, according to the officials.

Presenting the performance contracts signed between the ministry with its line agencies, Rwakunda said that the national carrier, RwandAir, which is behind these increasing numbers, will this fiscal year add five new destinations.

This will increase RwandAir’s number of destinations to 31 in Africa, Europe, Asia and North America.

Rwakunda said that the new destinations to be added through the fiscal year including Addis- Ababa, Guangzhou, Tel-Aviv, Conakry and New York.

Recently, the national carrier added new destinations including Brussels, London, Dakar, Abuja, and Cape Town. Before that, the airline had opened other long-haul flights to London in the United Kingdom and Mumbai in India.

The expansion of the airline’s operations has, according to officials, played a significant role in the rise of visitors in Rwanda and consequently a rise in tourism revenues.

Available figures from Rwanda Development Board (RDB) indicate that the tourism revenues from visitors who use air transport increased by 7% (Jan-July 2016/17).Though arrivals by air account for 13% of the traffic, they generated 57% of tourism revenues($145million, compared to last year’s $135.2 million.

Rwakunda said that the construction of Phase One of Bugesera International Airport has made great strides, saying that next June the works will be 70 percent complete.

Completion is expected before the end of the first quarter of fiscal year 2019-20, according to officials.

In 2017, Rwanda hosted 169 international meetings which brought tens of thousands of customers to its hotels, restaurants and the national airline and $40m was injected into the economy, according to RDB.

There also plans to improve cargo handling given that goods transported by air are expected to increase owing to the Guangzhou and New York routes that are expected to be launched during the course of this fiscal year.

13,000 tonnes cargo came into the country by air this past year stood either handled by RwandAir or other airlines operating in the country.