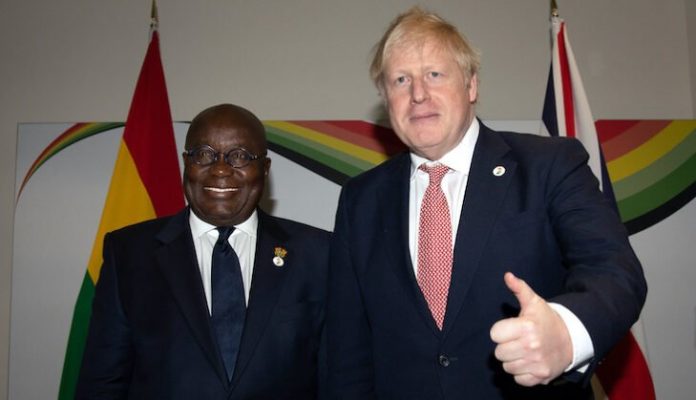 The first UK-Africa Investment Conference has launched with great fanfare two years ago. Then more than a thousand would-be investors and African entrepreneurs crowded into the Intercon Hotel in London to re-engineer a relationship worth more than fifty billion pounds a year.
Two years on and this month’s Investment Conference returned thanks to the Covid-19 Pandemic as a virtual event, a slim-line version of the 2020 launch when the UK Prime Minister strutted onto the stage with a pledge to make the UK what he called Africa’s “investor of choice”.

He repeated that ambition again on a pre-recorded video message this year:
“Africa has amazing opportunities, it will be home to a quarter of the world’s population and I want Britain to be with you every step of the way as Africa’s investor of choice”.
He said the UK had invested £2.5 billion into Africa in 2021 and he stressed the importance of his “clean green initiative” and the “green industrial revolution”. He mentioned how the UK was the biggest investor in South Africa in renewables and highlighted an initiative to deliver seventeen emergency bridges for Ghana to combat climate change.

This, however, was a much-diminished effort from the British Prime Minister. Two years ago, at the inaugural UK-Africa Investment Summit, he highlighted financial services, entrepreneurship, education, and security as some of the key sectors for collaboration. Then he praised a range of UK-funded initiatives from renewable energy in Nigeria and monorails in Egypt to fintech everywhere and joked about the future export of frozen oven-ready chickens to Angola.

None of that appeared in his brief address this time around, no mention of either of 2020’s pledges to support the importance of girls’ education which is one of his government’s stated priorities or support for Africa’s female entrepreneurs.

It was left to Dr Vera Songwe, of the United Nations Economic Commission for Africa to point out that UK-Africa trade actually declined by 20% in 2020, and that the UK’s Foreign Direct Investment (FDI) into Africa remains what she described as “disappointingly low”.
She said only 3% of the UK’s total FDI comes to Africa and that didn’t make for a strong relationship. She challenged investors to at least double this to 6% by 2027 and believed that the African Continental Free Trade Area (AfCFTA) which came into existence twelve months ago would be a bridge to increase Africa’s supply chains and enable Africa to boost its exports to the world.

The UK is the first country outside of the continent to sign a Memorandum of Understanding with the AfCFTA and has redesigned its investment arm the CDC – Commonwealth Development Corporation- into the newly-named British International Investment which will open for business in April 2022.

It will have an increased focus on climate finance and green infrastructure, what Prime Minister Boris Johnson calls his “Clean Green Initiative”.

According to the then International Trade Secretary Liz Truss who’s now the foreign secretary and perhaps future UK Prime Minister the change will have a broader mandate than the old CDC and reflect a desire to counter Chinese influence across the globe. Launching the British International Investment body, she said it would create jobs in the UK and help grow economies not just in Africa but across Asia and the Caribbean too. “It will draw them closer towards free-market democracies and building a network of liberty across the world”.
Many of the speakers at this year’s UK-Africa Investment Conference like the economist Dambisa Moyo and the Director-General of the World Trade Organisation Dr Ngozi Okonjo-Iweala, were agreed that the AfCFTA area can be a game-changer for the continent and play a big role in creating a bright investment future. According to the UK’s Trade Minister Anne-Marie Trevellyan, the AfCFTA will make a big difference and the UK is keen to work with it to deepen its relationship with Africa.

If the UK is to fulfil Prime Minister Boris Johnson’s promise to make the UK “Africa’s Investor of Choice” it would be a significant contribution to the economic development of the continent, but there’s still much to do. –for Africa as well as the UK.