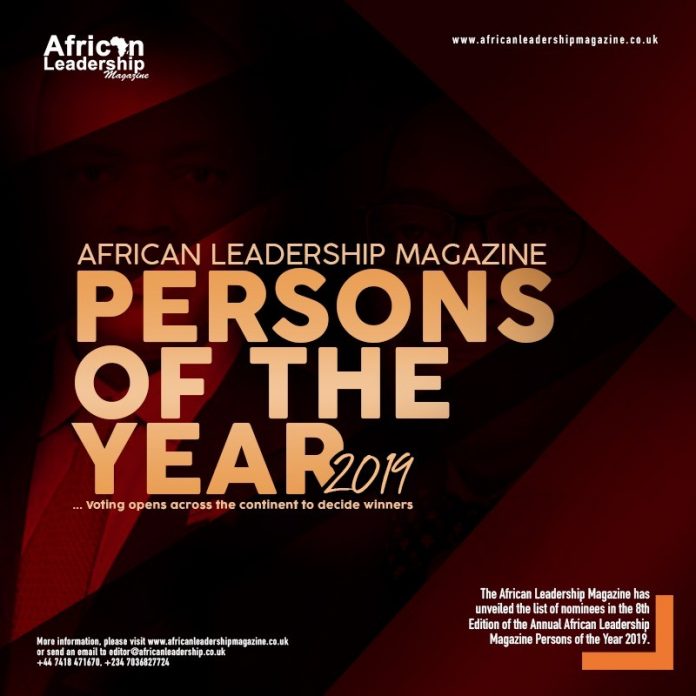 … Voting opens across the continent to decide winners

Portsmouth, United Kingdom, November 22, 2019:  The President of Egypt, Abdelfattah Elsisi, and the founder, RAMSCO Trade & Distribution company in Egypt, Rawyer Mansour, are the only 2 Egyptians in the final list of Africans nominated for the 8th African Leadership Persons of the Year Award. The duo who were nominated in the African Political Leader of the year and African Female Leader of the Year categories respectively emerged via a call for nominations and submissions from the continent and the African Diaspora.

The Publisher, Dr. Ken Giami, while unveiling the nominees at the group’s corporate head office in Portsmouth, United Kingdom, noted that the ALM Persons of the Year Award has continued to attract global attention and nominations from across Africa, as well as the African Diaspora, galvanizing conversations about Africa Now and the continent’s future.

Dr. Giami, commended the nominees, adding that, “they are all winners already, because, they have been selected by Africans out of the over 1.2 Billion people on the continent, as those deserving of this exclusive recognition.”

The shortlist was preceded by a call for nomination and the eventual winners would be decided via a voting process. Below are the distinguished Africans who made the shortlist of nominees in different categories, and all Africans are welcomed to vote:

African Female Leader of the Year 2019

This recognition is open to an African, whose contribution to the growth of education and deepening knowledge has been second to none in the year under review. It is also reserved for a member of the academic whose research or policy has contributed to shaping his or her country’s economic growth and development

This recognition is open to an African, whose actions, policies and business has helped in creating jobs for Africans in the year under review

This recognition is open to an African, who has given more to support a charitable cause, social justice and promote social good.

Criteria: Must be between the ages of 18-38; Young persons of African descent, making a difference globally via diverse sectors such as business, IT, entertainment, sports, etc, remaining a positive role model and re-defining creativity, resilience; hard work and ingenuity of the continent’s young people

You are therefore invited to vote for Africans in different categories for this prestigious award.   Voting closes on the 10th December 2019 at midnight Central African Time.

About the Persons of the Year Award:

The African Leadership Magazine Persons of the Year Award is a vote-based awards program, reserved for African business, political, diplomatic, Sports and Entertainment leaders, who are considered to have blazed the trail in different categories in the year under review. The awards enjoy one of the most participatory processes, as Africans get to decide who takes the coveted crown in different categories.   Winners are presented with the award in a colorful ceremony held annually in Johannesburg, South Africa.

Since its maiden edition, African Leadership Magazine has grown to become a leading pan-African flagship leadership-focused publication read by targeted international investors, business executives, government policymakers, and multilateral agencies across Africa, the Middle East and Asia, Europe, and the US. It is distributed at major international and African Leadership events around the world. The magazine has over 900,000 subscribers/Followers on Facebook and a virile readership on other social media platforms. It is a niche and unbiased African voice, telling African stories from African lenses.