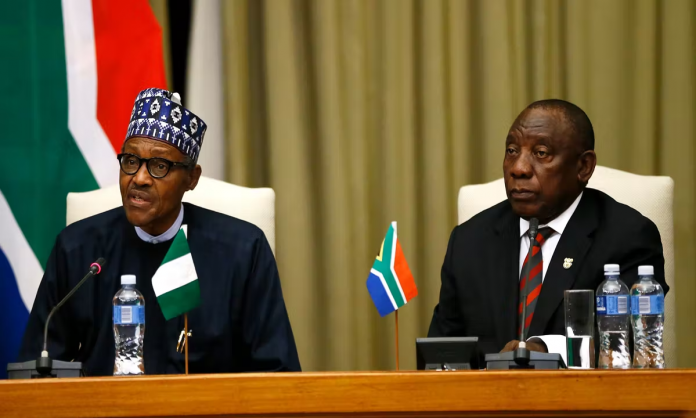 Nigeria and South Africa are two African countries that have given well to the continent. No wonder their economies are referred to as the highest and giants of Africa.

Though Nigeria is ranked top on GDP, South Africa is a far more developed country than Nigeria, with good infrastructure and banks, and a diverse and sophisticated economy.

The two countries have rallied other countries to restore peace and stability in other African countries that were in crisis. They have been good when it comes to Continental leadership.

Nigeria and South Africa have led most conflict-management initiatives in Africa in recent years, and they account for at least 60 percent of the economy of their respective sub-regions in West and Southern Africa.

Both countries are trying their best to improve on democracy, development, and security, and they are also seeking foreign investments that would revive Africa’s ailing economies.

Again, they have both championed the establishment of the African Union and some other notable bodies.

According to a Nigerian Scholar, who has lived in South Africa for many years, Adeleye Adenajo, “the success of the political and economic integration in Africa thus rests heavily on the shoulders of these two regional Gullivers, who have both collaborated and competed in Africa’s most indispensable relationships.”

But, both countries have been seen to be at loggerheads on several issues, which have made their relationships questionable.

One of such is the Xenophobic attacks against immigrants, I.e Nigerians in South Africa.

These attacks have been seen to be one of the major setbacks that South Africa has with Nigeria in terms of diplomatic relations.

The protection of lives and property of immigrants in post-apartheid South Africa remains a subject of controversy and concern.

Though apologies always come after the attacks, the South African government could do more than just an apology, which after apologizing, the same attacks occur again.

Policies, laws, and sanctions could do better in such cases.

Leaders in South Africa can also come together and engage the youths in constructive conversations and sensitization on respect for humanity.

One similarity between both countries is that they tend to go through situations at the same time, for instance, after the covid-19 pandemic, Nigeria and South Africa are experiencing unemployment at their peak. South Africa is seen to top the list and Nigeria at the third position.

The South African economy has been suffering from joblessness, and this has contributed majorly to the increase in the poverty rate and inequality that has lasted for more than three decades after the end of the white minority rule.

In the Nigerian economy too, the rate of unemployment has skyrocketed since 2015 due to the two recessions that had hit the economy in under five years.

This trend of rising unemployment and poverty in both countries is not favourable to their economies as this would not encourage foreign investment or boost productivity.

It is now a concern for both countries’ leaders as they are putting up policies that would help in reviving their economies.

This calls for the need for both countries to keep stronger ties and profer and work on possible ways of solving the situation.

Adeleye Adenajo explains that South Africa on the other hand says Nigerians’ involvement in drug trafficking and fraudulent scams are enough to not let them do business in their country.

South Africa and Nigeria have over the years, invested in cultural and social bonds but it’s pathetic to say that it has been underutilized.

Nigeria contributed to the emancipation of South Africa from the grip of apartheid. Civil Servants in Nigeria were paying a tax called Mandela Tax to support the African National Congress in fighting apartheid.

South Africa also, was at the forefront of the fight against the dictatorial regime of General Sani Abacha in 1995 in Nigeria.

For both countries to be stronger and strengthen bilateral political, economic, and trade relations, Nigeria- South Africa Bi-National Commission was established in 1999.

Boosting the activities of Nigeria and South Africa’s foreign trade relationship is the duty of the commission.

Now the question is, how well and effective has the commission been?

When the Commission was established in 1999, the two countries were devoted to fast-track relations in foreign policy, culture, health, and agriculture. Both presidents at that time, Olusegun Obasanjo and Thabo Mbeki agreed to work in line with what was planned.

Today, the commission has achieved little compared to its mandate. And this backwardness has been linked to the internal struggles and challenges of both countries concerning politics and the economy.

For the commission to function properly on its mandate, there is the need for it to expand and involve the private and public sectors and even those in the Diaspora.

There should be easy movement of people and goods between both countries. Both countries have gotten to the stage of issuing visas on arrival, and the Commission should be able to see that this gets implemented.

The two countries need to agree on promoting bilateral ties, seeing how they are struggling with their economies and also, so that they would be relevant in the African Continental Free Trade Area, AfCFTA.

Bilateral and political relations between Nigeria and South Africa are strong, as l Nigeria is seen as one of South Africa’s strong partners on the continent in advancing the vision of Africa’s political and economic renewal.

Nigeria accounts for 64 percent of South African trade with the West African region and Nigeria is one of South Africa’s largest trading partners on the continent.

Nigeria and South Africa being the strongest economies in Africa should cultivate strong binding ties that will extend beyond economic relationships to social and cultural relationships, and make these relationships to be based on fair, equitable, and mutual considerations.