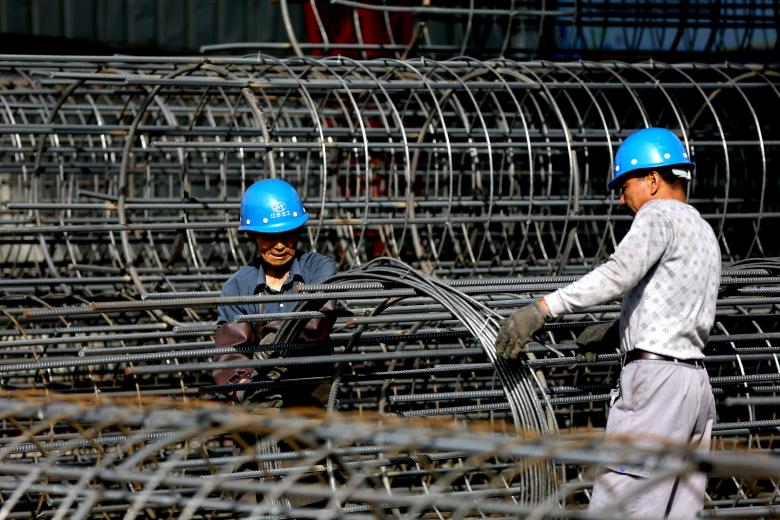 By Yawen Chen and Ryan Woo

China’s manufacturing and services sectors expanded at a solid pace in May thanks to robust construction and infrastructure investment, welcome news for authorities trying to strike a balance between maintaining stable economic growth and defusing debt risks.

The official manufacturing Purchasing Managers’ Index (PMI) was at 51.2 in May, unchanged from April, a monthly survey by the National Bureau of Statistics showed on Wednesday. Analysts polled by Reuters had predicted a reading of 51.0.

The survey results suggest authorities were having some success in stabilizing the broader economy without risking a sharper slowdown in growth as they try to defuse bubble risks from years of credit-fueled stimulus.

On the whole, “China’s economy is changing into a trend of stabilization from a momentary spike and drop,” Zhang Liqun, an analyst with the China Logistics Information Centre, said in a statement.

Most analysts agree that momentum in China will slow after strong first quarter growth of 6.9 percent, as Beijing’s crackdown on its financial sector is expected to take a toll on corporates’ financing costs.

So far the slowdown has been benign, however, with some key sectors such as construction activity holding up well.

The statistics bureau said construction remained robust despite slowing a notch from the previous month, as infrastructure investment speeded up, boosting demand for steel.

Indeed, activity in the steel industry expanded the most in a year in May, supported by higher new orders, a separate industry survey showed, suggesting still-solid demand in construction.

Growth in the services sector also accelerated to 54.5 as commercial services such as retail and railway transportation expanded on rising demand.

New orders for China’s manufacturers kept pace with April at 52.3, with export orders forming a touch by 0.1 percentage point to 50.7, suggesting external demand held up.

Production stayed well within the expansionary territory, though growth eased to 53.4 compared to last month’s 53.8.

The government has set a more modest growth target of around 6.5 percent for 2017, after achieving a slightly higher 6.7 percent target in 2016.

The crackdown on financial risks, however, is seen pushing borrowing costs up and dragging on growth.

ANZ analysts estimate the average lending rate has edged up by around 30 basis points in the past few months.

“We suspect that the current stability of growth will prove temporary,” said Julian Evans-Pritchard, a Singapore-based China economist at Capital Economics.

“With the regulatory crackdown on financial risks still weighing on credit growth, it will be difficult to avoid a further slowdown in the coming months.”

There are also doubts about whether other sectors of the economy will be able to pick up the slack if the property market slows as persistent curbs gradually take the heat out of the market.

Those worries were inflamed last week when Moody’s Investors Service downgraded China’s credit ratings for the first time in nearly 30 years, saying it expects the financial strength of the economy will erode in coming years as growth slows and debt continues to rise.

China’s growth impulse is also being challenged by a slowing trend in producer price inflation. Official data Saturday, revealed that profits earned by Chinese industrial firms dropped to its weakest in four months in April.

The input price sub-index dropped to 49.5 in May, according to the statistics bureau’s May PMI survey, after easing to 51.8 in April, as the tailwind from a commodities boom weakens.

China’s biggest steelmaker, Baoshan Iron & Steel (600019.SS), for instance, cut its main steel product prices for May and June after a long series of increases.

Property sales growth also slipped in April and a strong rebound in commodity prices appears to have peaked, pointing to a continued slowdown in the industrial sector.

On whole, however, analysts don’t expect economic growth to slow sharply this year, noting the government is keen to maintain stable economic and financial conditions heading into a key political leadership reshuffle later in the year.

“In the months leading up to the 19th Party Congress in November, stability will remain the top priority for Chinese policymakers,” said ANZ’s chief China economist Raymond Yeung.