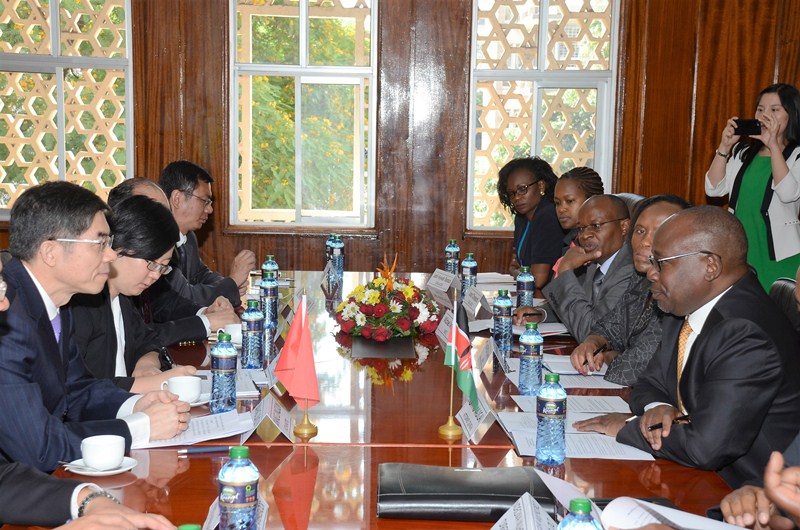 The Chinese Government has pledged to support Kenya in its fight against high level corruption observing that if left unchecked, the vice could lead the country to degenerate into a lawless society.

This comes as 12 people were killed on Tuesday in a dawn attack by Somalia-based al-Shabaab terrorists on a Mandera hotel in Mandera County.

The Chinese Vice Minister of the Ministry of Supervision of the Peoples Republic of China, His Excellency Wang Lingjun, stated that China was going to support the Kenyan government in the areas of asset recovery and repatriation of illicit proceeds.

“We shall share our experiences in anti-corruption and provide opportunity for you to understand the various challenges in this fight that you are struggling with. All countries have challenges but the support of the people we serve gives us the drive to ensure that we strive to achieve a zero tolerance status in China,” the third senior most ranked official in the Chinese Communist Party stated.

Mr. Lingjun was speaking when he led a high powered delegation of senior Chinese government officials in paying the Attorney General Professor Githu Muigai a courtesy call at his offices.

Kenya has further reaffirmed her position that corruption if not controlled or eliminated continued to remain a big threat to the survival of the state. The Chief Legal Advisor stated that Kenya could not afford to allow illegitimate forces outside the state to control the state as this would lead to the country degenerating into a totally lawless society.

“Kenya cannot afford to go that direction hence we must protect our country. Currently as a Government, we are trying to marshal the discipline we need to confront these cartels that are trying to control the state using illegal processes and illicit proceeds,” Muigai reiterated.

“Your fear of corruption is what led China to put in austerity and harsh measures in addressing this vice. The struggle has not been easy. We did not want to lose the support of the people who put so much faith in us. For us in China, we must tackle corruption at all levels. Extravagance and hedonism had to end no matter the cost. Government officials had to be stopped from using public funds for their own benefits. These look very trivial, but it affects the confidence of the people we serve,” Mr. Lingjun informed his Kenyan counterpart.

The Chinese leader went on said “We are committed to ensuring we have a zero tolerance policy towards corruption. Over the last three years China has managed to recover close to 8 billion US dollars with almost 200 high ranking officials at ministerial level having been arrested. Of these, China thanks the Kenyan government for its assistance in the arrest and repatriation of one of the criminals who had sought a safe haven here.”

The major areas that the Chinese Government has concentrated on during the last three years include assets recovery in various parts of the world as well as the repatriation of criminals and their proceeds. “We are working with our allies to assist us bring these criminals home to face justice as well as recover what has been looted,” Mr. Lingjun concluded.

The two governments have proposed to further enhance bilateral cooperation and exchanges as well as establish and improve cooperation mechanisms in the repatriation and recovery of assets.

Negotiations between the two states are expected to commence before the year ends with the aim of developing three crucial treaties, the Treaty on Extradition, the Treaty on Mutual Legal Assistance and the Treaty on the Transfer of Prisoners.

Present during the courtesy call were Mr. Ndegwa Muhoro, Director of the Directorate of Criminal investigations, Ms. Muthoni Kimani, Director of the Assets Recovery Agency, Ms. Caroline Muchunu from the Financial Reporting Centre and James Muraya from the ethics and Anti-Corruption Authority.