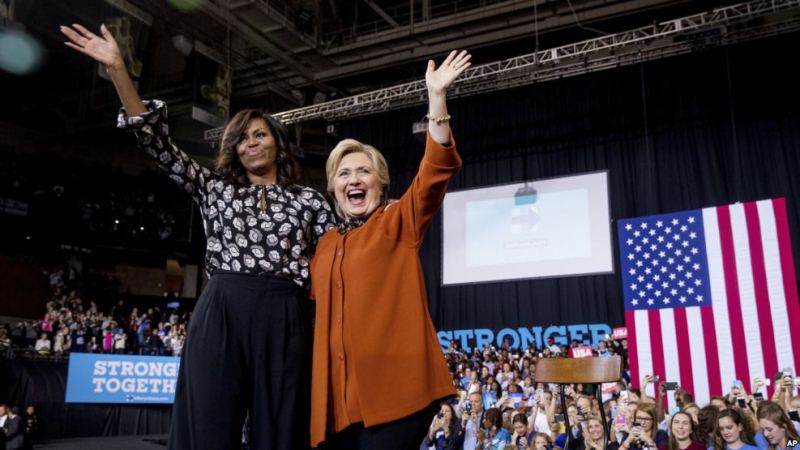 A former first lady running for president shared the campaign stage for the first time with a current first lady Thursday as polls showed a tightening race for the White House.

Michelle Obama rallied voters in Winston-Salem, North Carolina, with another rousing and emotional speech of the kind that has become her trademark since she started actively campaigning for Democrat Hillary Clinton.

“She has more experience and exposure to the presidency than any candidate in our lifetime,” Obama said. “More than Barack [Obama], more than Bill [Clinton]. So she is absolutely ready to be commander in chief on day one. And, yes, she happens to be a woman.”

Without mentioning anyone by name, Obama urged the crowd not to believe anyone who is trying to make the election “dirty and ugly” by saying it is rigged.

“They are trying to get you to stay home; they are trying to convince you that your vote doesn’t matter, that the outcome has already been determined. … They are trying to take away your hope. … In this country, the United States of America, the voters decide our elections. Period, end of story,” she said to huge cheers from the crowd of supporters.

The past and present first ladies hugged and called each other “friend.”

“There are so many things I admire about our first lady,” Clinton said. “Michelle reminds us to work hard, stay true to our values, be good to one another and never stop fighting for what we believe in.”

North Carolina is one of several battleground states — states a candidate must win if he or she wants to get to the White House.

An average of polls taken in North Carolina gave Clinton a 3-percentage-point lead over Republican Donald Trump, with one of those surveys, conducted by Remington Research, giving Trump a 3-point advantage.

Trump was in another battleground state Thursday — Ohio — where he had a slight 1 percent lead, according to some national surveys.

He boasted he was going to win the election on November 8, but said he didn’t want to take anything for granted.

“Early voting is under way, so make sure. Get out and vote. We don’t want to give this one away,” he said Thursday.

Trump told supporters in Toledo that it was time for new leadership in the United States because the country was “like, in a time loop.”

“We keep electing the same people over and over again, who keep making the same mistakes,” he said.

Trump vowed to fight for all Americans from every background if elected.

He again called his opponent a “liar” and the Clintons corrupt after another hacked Democratic Party email was leaked to the public.

This one showed a longtime aide to former President Bill Clinton encouraging wealthy clients of his firm to contribute to the charitable Clinton Foundation and provide big-money speaking fees to the former president.

The memo, written by Doug Band, also suggested “in-kind” services for Clinton and his family, including vacations and travel-related hospitality. The Band memo called the arrangements “Bill Clinton, Inc.”

The memo was part of a release by WikiLeaks of Clinton campaign chairman John Podesta’s hacked emails.

While what Band did was not illegal, it simply looked bad for the Clinton campaign, which has denied allegations that big donors to the foundation got special access to Hillary Clinton when she was secretary of state.

“If the Clintons were willing to play this fast and loose with their enterprise when they weren’t in the White House, just imagine what they’ll do in the Oval Office,” Trump asked voters in Springfield, Ohio, Thursday.

The campaign has neither denied nor confirmed the authenticity of the emails. Democrats have blamed Russia for hacking party emails in an effort to manipulate the election.