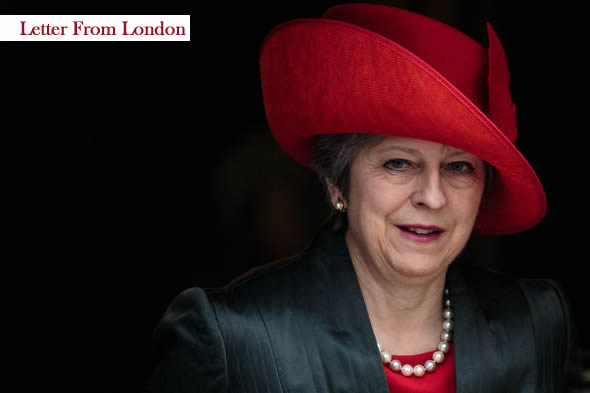 Britain no longer looks like Britain. Oh, Buckingham Palace is still there, and The Queen still reigns. Edinburgh Castle sits as solidly on its great rock as ever it did. London’s busses are still red. Its taxis still black. For the casual visitor it would be difficult to identify anything very much different about the UK at all.

Behind the veneer of normality lurks a country torn by Brexit. Mrs May’s cabinet and Conservative party continues to be bitterly divided about the route Brexit should take (so is the Labour party, but it is not in government). The EU says time is now desperately short to do a deal before the UK quits the EU in March 2019.

“**** Business”
Big business grows more concerned by the day and can’t make plans because nobody knows what the rules of trade will be in March 2019. The leaders of the UK’s car, aircraft and pharmaceuticals manufacturing sectors have all warned of dire consequences if the UK leaves the EU with no structures in place. The response of the Conservative party has shocked the business community. The Foreign Secretary has not denied saying “**** business.” The Health Secretary said Airbus, which accounts for over 100,000 jobs in Britain, was “irresponsible:” when it publicly voiced its worries. One former Conservative leader, Iain Duncan Smith, quite shockingly, made a historical comparison between big business today and how some British and German businesses acted when the Nazis came to power in the 1930s. Few can recall ever hearing such sad, bitter and divisive nastiness from a member of the British parliament.

In Northern Ireland, polling evidence is starting to show a consistent pattern of growing support for that part of the UK to quit being British and unite with the Republic of Ireland to the south. Northern Ireland voted 56% to remain in the EU. Whether in the near future a majority would vote to make such a dramatic change is doubtful. What is clear is that the old dividing lines of Northern Ireland; pro-British Unionism and Protestantism on one side and Republican and Roman Catholic on the other are breaking down. Significant number of young people have rejected religion for secularism and see themselves as Irish Europeans.

In Scotland, support for independence has been if not reborn, then greatly refreshed. In the past month, over 7,000 people have joined its main party of independence and marches in support of the cause have attracted  many tens of thousands. Scotland voted 62% remain.

Middle England Calls for a “People’s vote”
The biggest march by far was the march in London on 23rd June, exactly two years to the day from the referendum that saw the UK vote to leave the EU. This march was at least 1000,000 strong and some police sources say may have been as many as 500,000. It was certainly huge. I know, because I joined it. This was middle England on a day out to call for the public to have a referendum on the final terms the UK government agrees with the EU.

You’ll never meet a more courteous, friendlier and good-humoured protest march in your life. They came from all over Britain. Grandparents. Mums with toddlers. Students. Families of three generations; holding hands in solidarity. Doctors, steel-workers, van drivers, journalists, teachers and shop workers. I saw one couple carrying a banner telling us all it was their wedding anniversary. The message was clear. Marching for what is now called “A people’s vote,” has become the most important public issue of their time. Among the British people – of numerous ethnic backgrounds – were Dutch, Italians, Germans, Poles, French and Belgians. I suspect all of the 27 EU nations were represented, for three million EU citizens who’ve married, built families, paid taxes and been good citizens still don’t know what their long-term status in the UK will be, after Brexit.

Polls Reject “Hard Brexit”
Despite two years of daily hearing how complicated, economically dangerous and socially damaging Brexit will be, the UK – I should say England – is still divided 50/50 on the whole matter. One thing has changed and its almost certain to be the one piece of external, non-party, information Mrs May will have taken to heart. It is that consistent polling shows well over 60% of British people do not want a “hard Brexit.” The people fear great damage to jobs, families, communities and nation if the extreme Brexiters in the Conservative party get their way. The public wants a sensible, pragmatic Brexit that minimises the harm of quitting the EU and gives the country time to properly adjust and businesses to keep succeeded and employing.

Mrs May knows that the essence of the Conservative’s record as the most successful political party in British history is its pragmatism. It bends and changes in response to what it sees as the most sensible thing to do to protect British people and their interests. Ideology always come second to Tory common sense. It’s why voters give them their trust. That trust is weakening under the hard Brexit onslaught on Mrs May.

The Crunch Is Coming
The crunch is coming. This week, this Thursday 5th July, all of Mrs May’s cabinet will meet at the Prime Minister’s official country residence. Chequers, just an hour’s drive outside London.

Mrs May will call for the whole cabinet to back her plan to stay closely aligned to the EU on trade and movement of goods. It’s the complete opposite of what her Brexit wing wants. But it’s what most of her MPs want, most of parliament and, it seems, most of the country. But the time for debate is nearly done. This Thursday will be the final moment the extremists will have to get their own way.

Some hard Brexiters are considering a challenge to her leadership, so they can put one of their own into the top job and get the Brexit they dream of.  Her response has been to challenge them back. She knows an attack on her position as party leader now risks finally splitting the Conservatives in two. It would also risk a general election that they would struggle to win. Perhaps risk Brexit itself. Mrs May will probably win. If she takes a reasonable deal to the EU she will get a reasonable response. If, on the other hand, the hard Brexiters call for her head, the UK, the EU and much of the western world will be plunged into a deep crisis.

My prediction is Mrs May will win the day. Mainly because the hard Brexit wing knows it does not have the parliamentary numbers to beat Mrs May in a leadership contest. There is however a far greater reason for reason to prevail. The people of the UK have had enough of the Conservative party’s Brexit games. They are fed up with the lack of clarity, direction and purpose. If Mrs May is toppled this week, the country will be in turmoil and a general election almost guaranteed. At the ballot box, the people will punish the Conservatives for making a mess and for preferring ideology to pragmatism.

Martin Roche is a graduate of the great and ancient University of Aberdeen, Scotland, where he read politics and international relations. He began his working life on a daily newspaper in his native Scotland and has since written for newspapers, magazines, tv and radio stations in the UK and internationally. As a communications consultant, he has advised business and political leaders in over 20 countries.