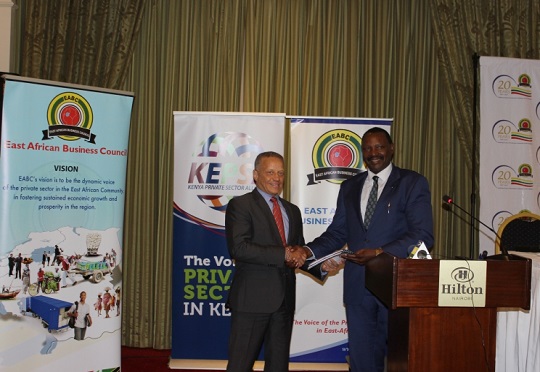 Dr. Manu Chandaria, EABC Founding Chairperson in his remarks during the 19th AGM said, “As the Private Sector, our interest should be one East Africa and not our country.”

In his acceptance speech, Mr. Nesbitt emphasized the need to increase competitiveness of East African companies and SMEs to compete at continental as well as international level.

“Let’s focus on competitiveness of our businesses to sell our goods at regional, continental, and international scale,” said Mr. Nicholas Nesbitt. “Adopt technology such as block chain to solve regional challenges like counterfeits and contrabands.”

The Annual General Meeting (AGM) is the supreme policy making organ of the East African Business Council (EABC). The AGM meets once a year to elect the Executive Committee led by the Chairperson, receive annual report on the initiatives undertaken by the Secretariat and give overall directives to the Secretariat in line with the Strategic Plan and interests of the business community in East Africa. The EABC Board of Directors consists of 22 members, headed by a Chairperson, elected from the Partner States on an annual rotational basis. Each country nominates 4 Members to the Executive Committee.

Mr. Nesbitt also appreciated the efforts of the former chair Mr. Jim Kabeho in coordinating thework done in the year 2017 together with the Executive Committee.