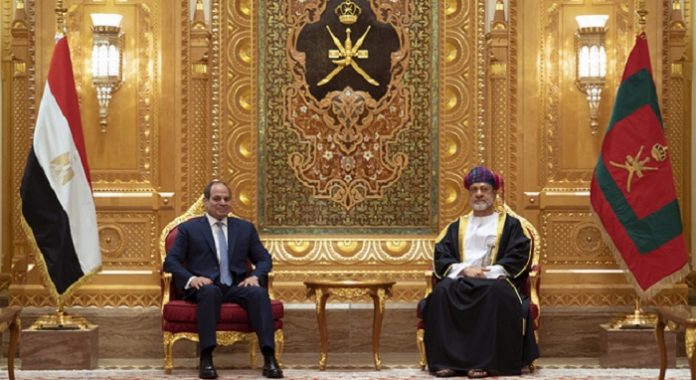 President of the Arab Republic of Egypt, Abdel Fatah El-Sisi, and the Sultan of Oman, Haitham bin Tariq, instructed studying the establishment of a joint investment fund between the two countries, concerned with investing in feasible projects in various vital sectors, and they affirm their determination to raise the pace of economic cooperation.

A joint statement confirmed that the two leaders referred to the close cooperation and permanent coordination in the political, diplomatic, economic, and cultural fields, and affirmed their continued support for everything that would serve the pillars of security, stability, and peace in the region and the world.

They directed all competent authorities to discuss investment opportunities between the two countries in various fields, including energy, renewable energy, industry, health, and pharmaceutical industries.

The two leaders stressed the importance of dialogue and peacefully addressing differences on various regional and international issues.

The Egyptian President also invited his brother Sultan Haitham bin Tariq to visit the Arab Republic of Egypt, and the invitation was very welcomed.