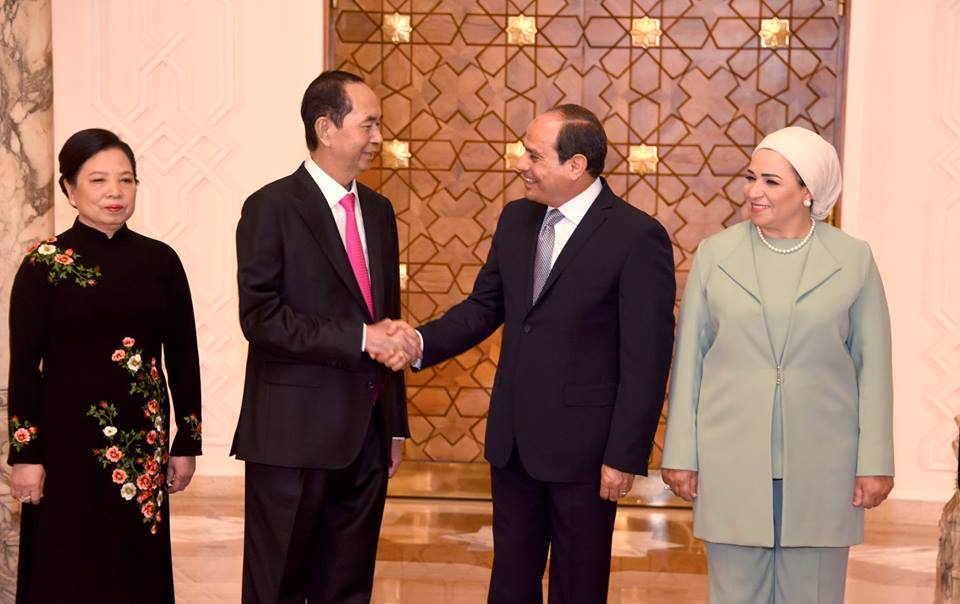 Egyptian President Abdel Fattah al-Sisi held a meeting on Monday with his Vietnamese counterpart Tran Dae Kwang at the Ittahadeya Presidential Palace, during which they discussed enhancing bilateral relations between the two countries.

The presidents held a closed bilateral talks session followed by another extended session, during which the ministers of Foreign Affairs, Investment, Petroleum, Higher Education, Planning, Finance, Agriculture, and Trade and Industry participated.

A joint press conference for the two presidents then followed the meetings.

“Your generous visit to Egypt is of particular importance in view of the fact that it is the first visit of a Vietnamese president to Egypt since the establishment of diplomatic relations between the two countries 55 years ago, and comes after the first visit for an Egyptian president to Hanoi which I made in September,” Sisi said during the press conference.

“We held fruitful discussions on how to strengthen bilateral relations at all levels as well as cooperation for international institutions, and reviewed international and regional issues of mutual concern. The talks discussed the strengthening of political, economic, military and security relations and means of combating terrorism, opening up Vietnamese markets to Egyptian exports and boosting tourism and cultural exchanges between the two countries,” he continued.

The Vietnamese president thanked President al-Sisi for the warm welcome, adding that the talks were successful and it was agreed to enhance relations in various fields between the two countries such as politics, economy, culture and tourism.