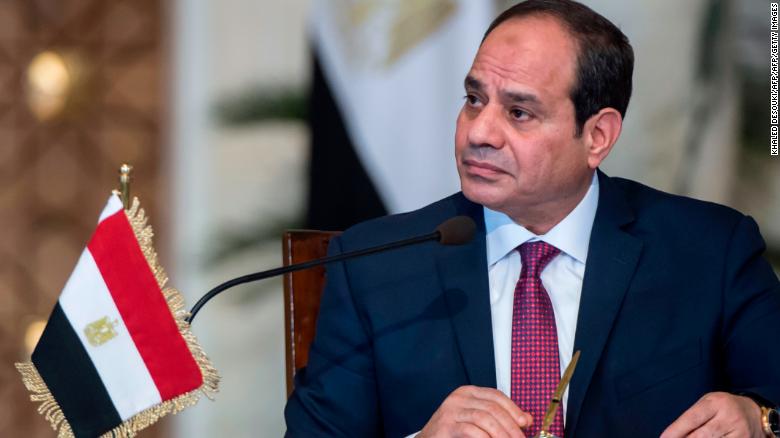 Aimed at combating extremism, the Anti-Cyber and Information Technology Crimes legislation prohibits the “promotion of the ideas of terrorist organizations” and allows authorities to block websites deemed by judges to be threats to national security.
It also bans the dissemination of information on the movement of security forces and imposes strict punishments for hacking government information systems, according to the state-run Al-Ahram newspaper.

The legislation was originally approved by the Egyptian parliament in May.

Since taking power in 2014, Sisi’s government has been criticized for blocking critical voices in the media and scrubbing digital content. Nearly 500 websites have already been blocked in Egypt since May 2017, according to the Cairo-based Association of Freedom of Thought and Expression.

The country’s parliament has also passed legislation strengthening the government’s ability to target social media in its continued efforts to crackdown on dissent. This includes categorizing social media accounts with more than 5,000 followers as public websites and therefore worthy of surveillance.

“Every day we receive reports about people from all levels of Egyptian society who have been persecuted for Facebook posts, tweets, art work, and even personal, unpublished writing that has fallen into the hands of the Egyptian authorities,” Najia Bounaim, Amnesty International’s director of campaigns in North Africa, said in a statement in July.

The regulations also require internet service providers to save and release personal information to security services upon their request and following the issuance of a judicial order, according to Mada, a Cairo-based journalism and media watchdog organization.
Human Rights Watch warned last month that Egypt was increasingly restricting online speech under the guise of counterterrorism.

“While Egypt faces security threats, the government of President Abdel Fattah al-Sisi has exploited these threats cynically as a cover to prosecute peaceful critics,” Nadim Houry, director of terrorism and counterterrorism at Human Rights Watch, said in a statement. “Egypt is combining a bad law with unjust courts and the outcome has been predictably disastrous.”

Those found guilty under the new law can face fines of over $10,000 and up to two years in prison, Al-Ahram reported.