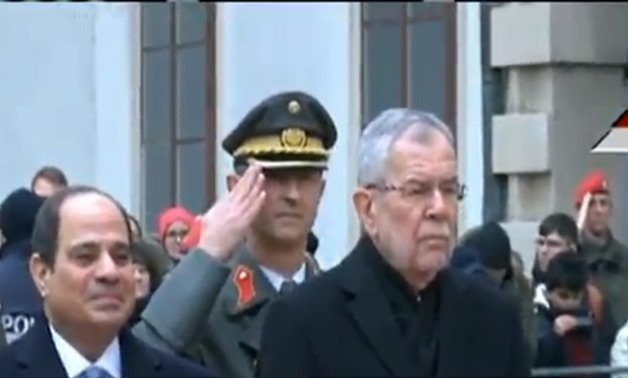 Egypt’s President Abdel-Fattah El-Sisi met on Monday with his Austrian counterpart Alexander Van der Bellen in Vienna, where the two leaders discussed enhancing bilateral ties on the economic and political levels, as well as boosting Austrian investments in Egypt.
El-Sisi affirmed that Austrian industries have a major opportunity in Egypt, especially in developing infrastructure in the country.

The president called on Vienna to take advantage of investing in Egypt to reach African markets, especially considering Egypt’s upcoming chairmanship of the African Union in 2019.

Egypt’s General Authority for Investment and Free Zones (GAFI) said that Austria occupies the 58th place of foreign countries investing in Egypt with a total capital of $74 million.

The two leaders also discussed a number of international and regional issues of mutual interest.

El-Sisi stressed to Van der Bellen the necessity of reaching a just and comprehensive solution to the Palestinian issue based on a two-state solution along the 1967 borders, and is in line with the Arab Peace Initiative and international legitimacy resolutions.

Meanwhile, President Van der Bellen praised Egypt’s pivotal role in preserving peace and stability in the Middle East, especially when it comes to curbing irregular migration and combating terrorism, as well as supporting religious tolerance and peaceful solutions to conflicts in the region.

Earlier on Monday, during a press conference with Austrian Chancellor Sebastian Kurz, El-Sisi stressed Egypt’s humanitarian and moral commitment to the safety and welfare of all, including 5 million refugees living in Egypt, as well as Cairo’s commitment to achieving stability in the Middle East.

The Austrian Chancellor affirmed said 600 Austrian companies operate in Egypt, making it one of the most important trade partners for Austria in Africa and the Middle East.

The Egyptian president is set to attend the High-Level Forum Africa-Europe in Vienna on Tuesday.