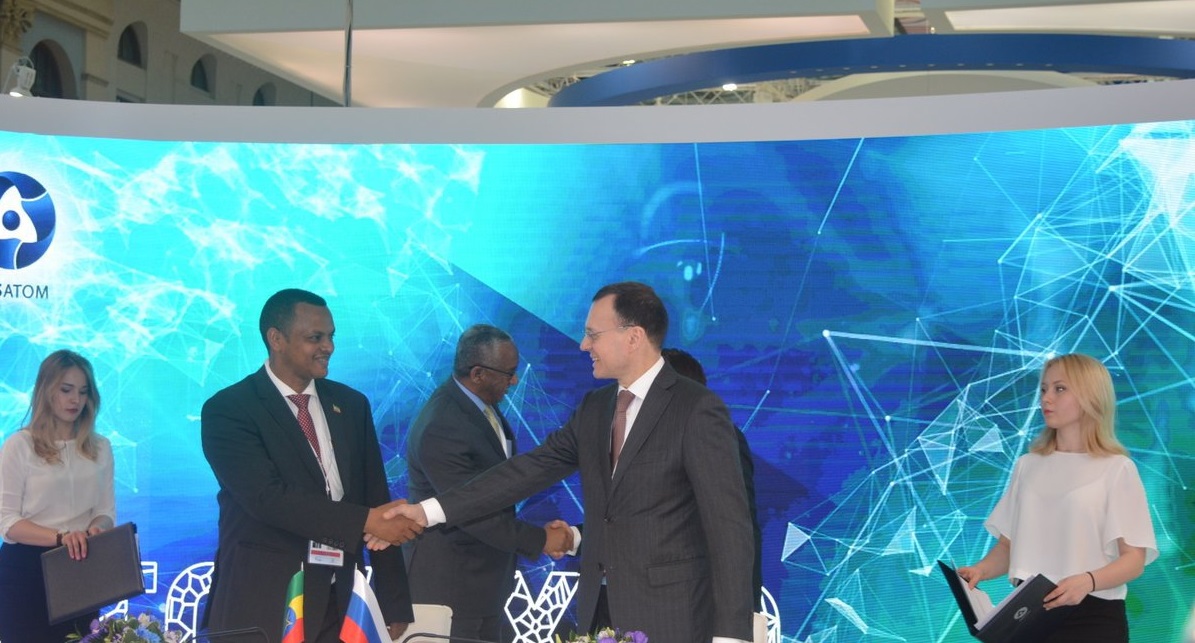 Ethiopia and Russia have reached an agreement to develop nuclear energy collaboratively according to reports from a number of reputable sources. This comes just weeks after 162 million US dollars worth of debt was written off Ethiopia’s balance sheet by Russian authorities.

Senior officials met at The Ministry of Finance and Economic Cooperation in Addis Ababa this March to discuss a list of projects in engineering, science and technology.  These projects will be undertaken by Russian and Ethiopian companies. According to the Russian Foreign Minister, Sergey Lavrov, his country valued ‘‘Ethiopia’s responsible and balanced policy in world affairs and its active involvement in the African Union.”

“Ethiopia’s independent foreign policy course contributes to its growing international authority. This is reflected in the country’s election as a non-permanent member of the UN Security Council in 2017-2018,” he added.

The collaboration further strengthens a 120-year relationship between the nations and will stand to improve trade and investment.

Russia and Ethiopia first established diplomatic relations in 1895 at the Battle of Adwa when the Soviet Union refused to acknowledge Italian occupation. An official partnership was drawn up on 21st April 1943 and has remained strong throughout the Derg, Ogaden war and modern government.

The former Ethiopian President Mengistu Hailemariam was known to be a staunch believer in Marxist ideology and was one of Russia’s main supporters against Western influences – especially in The Horn of Africa. This helped him to spend billions of dollars trying to suppress rebellions that arose in the Northern part of the country and neighbouring Somalia. The debt was not fully paid until now.

Along with the debt write-off, a MoU for peaceful application of atomic energy has been signed and agreed between both nations.  Nikolai Spasskiy from ROSATOM confirmed a nuclear research centre is planned for construction based on existing Russian designs. ROSATOM is currently the world’s No. 1 exporter of nuclear projects with a portfolio including 34 power plants in 12 different countries. Along with these services, ROSATOM also produces 3,000 metric tons of uranium from Russian mines and 5,000 metric tons annually from mines in other countries, including Africa.

As small-scale reactor is planned for Sudan and other nations considering nuclear as a source of energy are Kenya, Nigeria and Uganda. South Africa is the only country in Africa with a commercial nuclear power plant. Its two reactors are located in Koeberg and produce 5% of total electricity. Uranium deposits were found six years ago in Ethiopia and Russian Geological Survey firm Zaru Bezggeologia are analysing it.

The amount of uranium ore is still not determined. However, samples tested at the geochemical laboratory at the Ministry of Mines in Ethiopia have shown positive results. Zaru Bezggeologia is providing technical assistance to the survey and has an office in Addis Ababa. Russian geologists are providing training to experts in the Bole and Borena zones.

Currently, Ethiopia generates around 2,270 MW of electricity mainly through hydropower and 170 MW from two wind farms. It needs an extra 300-1,200 MW from nuclear energy to meet its total demand of 37,000 MW by 2037. Government officials are confident this is achievable and require around $156 billion for 550 projects.

Today only 27 % of Ethiopia’s population has access to electricity. This share is increasing because of an extension to the national grid and a number of stand-alone-systems. Up until now the country has avoided exploiting and importing fossil fuels as much as possible. Constructing power stations is a high priority and the introduction of nuclear power will go a long way towards hitting targets.

“Investment opportunities need to be low on risk and sustainable, where possible,” said Mihret Debebe, CEO of Ethiopian Electric Power Corporation. “Banks will get their money back when we link to the anticipated regional power market regulated under the East African Power Pool.”

Ethiopia’s most ambitious developments up until now are the Gilgel Gibe III Dam on the Omo River and Renaissance Dam on the Blue Nile. As of August 2017, the Renaissance Dam was 60% complete and at 6,450 MW, will be the largest hydropower plant in Africa.

The continent’s first waste-to-energy plant is planned for construction this year on the outskirts of Addis Ababa. It will consume 1,400 tons of trash daily and supply the capital with 30% of household electricity. Named REPPIE, this project is a consortium of three international companies – Cambridge Industries, China National Electric Engineering and Danish engineering firm, Ramboll.

Renewable energy sources have the potential to meet increased electricity demand but in a volatile climate such as Africa, Russia believes there is also room for uninterrupted power through nuclear generation. Moreover, only a small amount of space is needed to create the same amount as a dam, reservoir or wind farm.

Nuclear power reduces the need for non-renewable energy which lowers greenhouse gas emissions. Another advantage is the required amount of fuel, as less offers more. Nuclear offers a significant saving on raw materials but also in transport, handling and extraction. Power plants generate electricity for almost 90% of the time and so are much less volatile than other sources.

“Work is progressing at a good pace and there are no significant delays,” said Sergey Lavrov. “Our plans include the creation of an Ethiopian Centre for Atomic Science and Technology.”

Nuclear power has been used for peaceful purposes since the early 1900s but is often misunderstood through association with events like Hiroshima, Chernobyl and recent Fukushima Daiichi disaster. The number one service nuclear technology is used for is medicine – especially treating cancer. The portion of it applied in weaponry and war is very small compared.

On top of energy generation and medicine, nuclear power can be used to sterilize lowland flies. Since the 80s, countries such as Chile and Australia have implemented radiation techniques to improve agriculture. Millions of flies are sterilised per week and then released to mate but create no offspring. Gradually, the population is reduced and crops flourish.

Ethiopia plans to become a middle-income nation by 2025 and is expected to have a 250 billion USD economy by then as well. In the next twenty to thirty years, it may go as far as generating up to 1 trillion USD, so power supply needs to fulfil the increasing demands of a growing economy.

“If there is a plan to expand an economy by tenfold, then the energy supply should increase by 25 fold, said Dr Getahun, Minister of Finance and Technology for Ethiopia. “We cannot fulfil the country’s energy demand in ten or fifteen years through dams and reservoirs alone.”

One of the main disadvantages of nuclear power is managing waste and although it is expensive compared to hydro, wind and solar – the benefits are clear to see.

Public Outreach Centres will be set up at universities where students can be trained to take over when the main power plant is built. These multi-purpose communication platforms include a cutting-edge hall offering 3D panoramic projection, computer graphics and stereo sound. Visitors are invited to watch a 45-minute film about nuclear power including a number of interactive quizzes. The centres hand out booklets, educational literature and souvenirs. Admission is free of charge.

Transitioning to nuclear will be a long process but with the Renaissance Dam and so many other energy projects in the pipeline, Ethiopia is set to become an energy-rich country in the near future.

Ethiopia is a strong player in the Horn of Africa region, economically and on the security front. The country hosts the African Union headquarters and is a member of the Intergovernmental Authority on Development (IGAD). Working in partnership with the Russian business community will continue to bring mutual benefits such as cheap labour, technology transfer and new market access.

Strengthening of ties come at a time when Russia is warming up to host the football World Cup. Ethiopia recently resumed daily flights to Moscow and as they embrace nuclear as a new form of power generation, the Ethiopia-Russia love affair shows no signs of slowing down anytime soon.