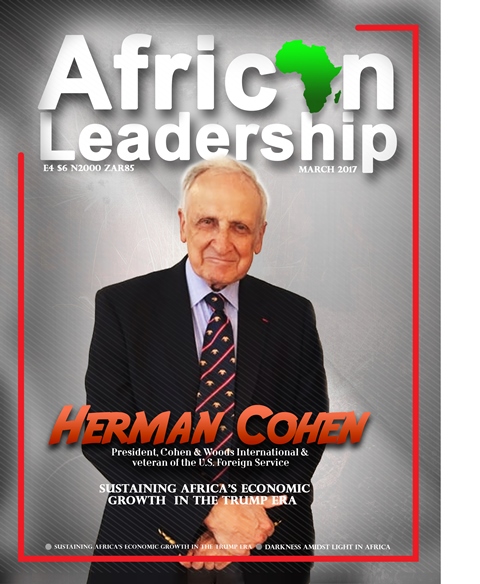 Ambassador Herman Cohen, a former U.S. ambassador to several African countries, advisor to multiple U.S. Presidents, and a 38-year veteran of the U.S. Foreign Service, has continued to enrich the discourse on US-Africa relations. Cohen had an extensive working relationship with African leaders including South African President Nelson Mandela and Libyan leader Muammar Gaddafi. In his time as Assistant Secretary of State for African Affairs under President George W. Bush Snr.’s Administration, and through his role at the National Security Council under President Ronald Reagan, Cohen worked to bring about transitions of power in South Africa and Namibia, and to end long-standing conflicts in Angola, Ethiopia, and Mozambique. Currently, Cohen is the President and CEO of Cohen and Woods International and a consultant on Africa for Contour Global Electric Power. Though still keenly interested in the evolving African political climate, Cohen now focuses on bringing investment to Africa and strengthening U.S.-Africa trade relations. In this exclusive interview with African Leadership as he turns 80 years, he examines some of the challenges to development in the continent, as well as factors that would shape the Trump administration’s engagement in Africa. Excerpts:

You have had extensive experience working in Africa as a diplomat; what would you say are the major factors, slowing down progress in the continent?

Economic progress and growth, in any nation of the world, comes from the investments of internal entrepreneurs, starting with ten sewing machines in a village to major poultry farms and cement plants.  Africa has many existing and future entrepreneurs.  The problem has been a lack of confidence in the political and legal systems of many African countries.  An African entrepreneur will not invest unless he or she can be sure that contracts will be enforced, fairly and rapidly, in the court system.  Unfortunately, this is not the case in many African nations. Many of the African business success stories are based on close political or family ties with the politically powerful.

The World Bank Good Governance Project has been on for many years, and you worked at a time on the projects for Africa; how would you rate the success of the project in Africa?

The World Bank Good Governance project has had a positive impact mainly in the area of transparency in government procurement. When African governments and companies make purchases abroad, there is now much more emphasis on the bidding process and the total availability of information.  There has been much less progress on upholding the rule of law, and on discouraging African governments from interfering in free enterprise.  One has the feeling that for many African governments, the private African entrepreneur, who is not tied to powerful people, is a threat to power.

You have done series of Publications, one of which is “The Mind of the African Strong Man: conversations with Dictators, Statesmen, and father figures; what would you say is responsible for sit-tight leadership in Africa?

There are a number of factors.  The first and second generation of African leaders, the men who brought their peoples to independence, felt that their populations were still immature because of colonial neglect. Therefore, their people needed a continuation of their protection, leadership, and wisdom. Many, but not all, of the third and fourth generation of leadership, became prisoners of their ethnic or regional ties, and were committed to maintaining power in order to satisfy those ties, especially in the realm of economics. Thus, minority selfish rule has been a major deterrent to national development.

What is the future of Africa-US relations under the Trump Administration?

Trump himself, and many people in his wing of the Republican Party feel that the United States has been too generous to the rest of the world. They feel that the outside world has taken advantage of US “softness”.  When they look at Africa, there is a feeling that much of our development assistance has not been successful, and therefore should be phased out. When they look at the African Growth and Opportunity Act (AGOA), they see a “one-way street.” The US is giving duty-free entry to merchandise produced in Africa, but Africa is not giving US merchandise the same privilege.  Trump might say that this is unfair to the United States. I am personally in favor of continuing AGOA, because when Africans increase their revenue, they buy more American products such as aircraft, heavy machinery, and technology.

What do you think will be the fate of the Obama Africa Power Project under Trump’s Administration?

I believe that “Power Africa” will survive because it encourages the private sector to invest in power generation and make money through the sale of power. Thus, it is a “win-win” project. More Africans will have access to power, and American private companies will make money from the sale of power.

Cohen and Woods International will continue to support the power investments of the New York Corporation, ContourGlobal, Inc.  CWI has assisted ContourGlobal with four power investments in Togo, Rwanda, Nigeria, and Senegal.  We are hoping to do several more in Africa during 2017, possibly in Côte d’Ivoire and the Democratic Republic of the Congo. An increase in our presence in Nigeria would be possible if more natural gas could be made available for industrial sites.

What would be your advice to African political and business leaders with respect to attracting international investors and enhancing entrepreneurial participation from its teeming populace?

When I speak to both American and African business leaders, they tell me that private investments in Africa could rise rapidly if investors could be sure that their investments will benefit from the rule of law and from the absence of political interference.  They are not demanding that they are assured of making profits. That is a normal commercial risk. What they are asking for is to be free of political interference.  Also, very important, is the availability of basic infrastructure.  It is difficult to have a profitable production facility without reliable electric power, good ports and airports, reliable water, and reliable road systems. I am happy to see that more and more African nations are reaching these goals and that entrepreneurs are investing in greater numbers. In particular, I can cite Côte d’Ivoire, Kenya, Eritrea, Botswana, and South Africa where the private sector is expanding.