African Leadership Magazine
Home Women in leadership Gender Gender and Politics: Celebrating the Achievements of Women in Parliament in Developing... 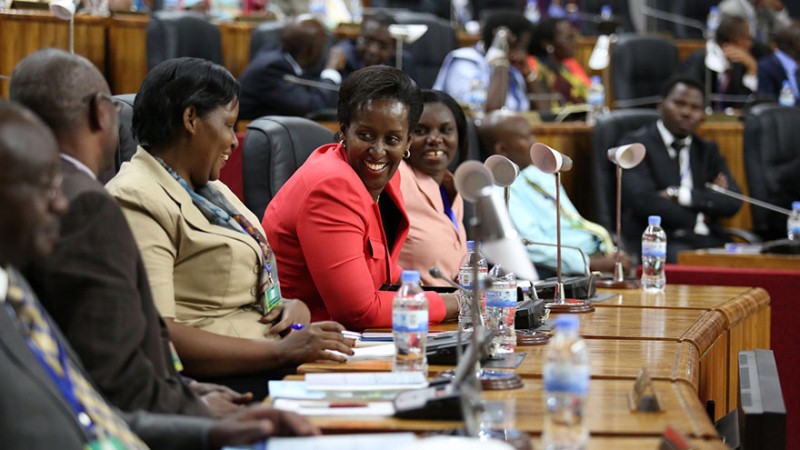 There are more women than men in parliament in Africa and across developing countries. This is very fascinating. An East African nation, Rwanda leads globally in the percentage of women parliamentary representation with 63.8%, followed by Bolivia with 53.1%, and Cuba with 48.9%, which are two South American countries. Seychelles, Senegal, and South Africa have over 41% of women representation in parliament.

It is indeed enthralling to note that in additional to the remarkable contributions of women in top leading executive positions of Government, such as Ms. Ellen Johnson Sirleaf, President of Liberia, women are also contributing, very tremendously, to the society as parliamentarians, by making laws that foster inclusive growth and development, empowering and protecting women against violations and other forms of abuses.

Over the following weeks, this column will celebrate the achievements of women-dominated parliament and female parliamentarians across developing countries, showcasing their contributions to the society and how helpful they have been in empowering and protecting women and the vulnerable in the society. This week, this column focuses on the Rwandan lower house, the Chamber of Deputies with the highest number of female representation globally, and the passionate and purposeful speaker of the house, Ms. Donatille Mukabalisa.

The Chamber of Deputies is the lower house of the bicameral national legislature of Rwanda. It was created under the new Constitution which was adopted through a referendum in 2003. While formulating the 2003 constitution, it was resolved that parliament must have at least 30% quota of women. The resolution has no doubt been the impetus bolstering gender equality in Rwanda, though it was a matter of necessity. After the genocide, with 70% of the survivors being women, they had to be significantly involved, being a sine qua non toward rebuilding the society, ensuring an inclusive reconstruction process.

With about 64% of women representation in the lower house, it could easily be said that women have been very crucial in the reconstruction, reconciliation and rebuilding processes that have seen Rwanda becoming relatively united, peaceful and very prosperous, more than ever.

Mukabalisa, the leader of the house, after the country’s national elections, was elected Speaker of the Rwandan parliament in 2013.  The 56-year old, who studied law, joined politics in 2000, inspired to fight injustice in a country where human rights has been seriously damaged, largely due to the genocide. The mother of 3 has had a long career in Rwanda’s legislature, and contributed remarkably towards the development of the country in that capacity.

As a Member of Parliament (MP) in the Transitional National Assembly between 2000 -2003, Mukabalisa served as deputy chairperson on the standing committee on economy and trade. Later in 2003, she returned as a member of the first Parliament after the transition and promulgation of the 2003 Constitution, which ushered Rwanda into a bicameral legislative system, with the establishment of the Senate. During that period, she served as deputy chairperson, standing committee on political affairs in the Chamber of Deputies. In 2011, Mukabalisa campaigned in senatorial polls and was elected by voters in the Eastern Province. She quit her senatorial seat, in 2013, to run in the polls for the Lower Chamber on the Liberal Party (PL) ticket. She won and was nearly unanimously elected as speaker of the lower house.

Some of the achievements of the female-dominated parliament have been in the area of women empowerment. Findings reveal that women in Rwanda now obviously have the right to own land. They have the right to acquire properties with the right to still own the property, even in marriage. And Inheritance laws have been amended for properties to be equally shared between children, regardless of gender. This is quite a remarkable achievement when compared to developing countries with men-dominated parliament. In parts of Nigeria, for instance, women still do not own properties, assets acquired within marriage belongs to the husband, and a wife and female children still are not allowed to have a share  of inheritance. It is important to note that the domination of the Rwandan parliament by women have positively shown its importance, addressing the gender inequality in the society.

The inclusion of rape in the genocide statute has helped in addressing the problem of gender-based violence. Violence against women, which is a very serious problem across developing nation, has significantly been addressed in the country, through legal reforms and police education, creating free hotlines for victims,  and heavy sentences for perpetrators. It is also fascinating that every police station in Rwanda, like the national army, has a dedicated “desk” to take reports of violence against women. Relatedly, a survey in 2012 showed that residents of Rwanda consider the country the safest place for women to live in Africa. This is what women in governance can achieve for the continent.

Other areas, such as healthcare, have experienced inclusive growth and development. Contraception is now widely available in the country. Women issues, such as sex education, and even taxes on sanitary products imported into the country, are being discussed as political agenda are included in issues of governance thin the country. The girl-child education has been made a priority in the country. Statistics have shown that there is almost equality in the number of boys and girls in primary schools across Rwanda.

With some of these achievements, it is easy to say women in governance have been very successful in their efforts and contributions to societal development.