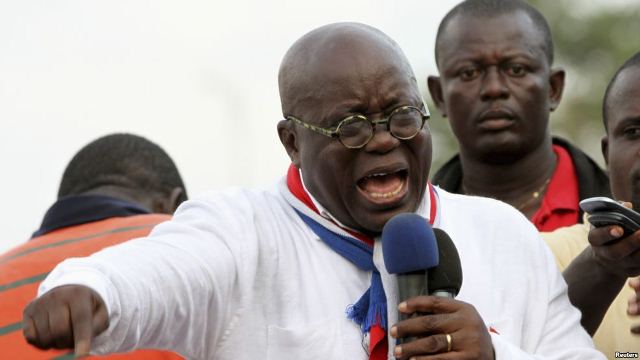 The leader of Ghana’s main opposition party, Nana Akufo-Addo, climbed from his car, picked up a microphone and made a bold election promise to give every constituency the equivalent of $1 million a year if his party wins power.

The money would be used to alleviate poverty by installing basic services such as electricity, running water and sanitation in a country that has accepted an IMF bailout in part to help manage debt accumulated from past government spending.

Akufo-Addo and his running mate Mahamudu Bawumia did not explain to the crowd how they would finance the plan, which would cost $1.1 billion over four years, given that Ghana has 275 constituencies.

But this did not appear to matter to the hundreds who had waited until after dark for the New Patriotic Party (NPP) rally on Friday in Salaga, a trading town in one of Ghana’s poorest regions. They blew vuvuzelas and roared their approval.

“We have many, many good policies,” Akufo-Addo said as he campaigned for the Dec. 7 vote. “And I want you to know that I will never, ever stand before you and tell you I can do something that I cannot do.”

Promising new initiatives in a time of austerity is a favourite tactic of politicians the world over and, to head off the scepticism such pledges often face, the NPP insists its plans would not break the budget.

Funds for constituencies would come from the existing budget, while the private sector rather than state-run corporations would help support other plans.

Akufo-Addo also promised to build a dam in every village, a factory in every district and offer free secondary school education as he toured the northern region.

Policy debate matters in elections in Ghana, a stable democracy where ethnic alliances do not play a decisive political role. Akufo-Addo is bidding for power for a third time, having lost in 2008 and 2012.

His party, however, won two elections starting in 2000, during which time he served as attorney general and then foreign minister.

It was difficult to assess whether the $1 million promise and the rally as a whole won new converts in Salaga, though if it enthused supporters it will have served an electoral purpose.

One development worker who already supports the party said the pledge would mainly help to focus local government spending.

“This (spending plan) is very good … What he is trying to do will help local districts to better plan and execute their projects,” said Iddi Zakaria, who works for a local NGO.

Since President John Mahama’s narrow victory in 2012, Ghana has lost its reputation as one of Africa’s hottest investment destinations, as a global commodities slump reduced revenue from exports of gold, oil and cocoa.

The government says it is committed to following the $918-million bailout even in an election year when administrations often spend more cash.

It also says the crisis is over, pointing to 4.9 percent GDP growth in the first quarter of 2016, up from 4.5 percent in the same period last year. At the same time, the deficit has halved since 2014 to around 5 percent of GDP.

Even so, the downturn, which raised unemployment, provides ammunition for Akufo-Addo, whose party if elected would face the same fiscal constraints as the current government.

The NPP is yet to launch its manifesto but said it plans to reallocate 20 percent of current capital expenditure to pay for its policies on poverty alleviation, rather than borrow, and it vows to impose strict fiscal discipline.

“The life of our population is not going to get better unless the economy grows (faster),” Akufo-Addo told Reuters.

Some commentators doubt the opposition pledges. Consultants would be needed to make it work so some of the money would go to them, said Kwami Ahiabenu, an expert in governance and technology.

There is also no guarantee that communities would make the best choices or allocate money within each district coherently.

“If I have a factory, will I have a road, will I have electricity? Will I have a market to sell my products?” Ahiabenu said, adding that the plan could work only if it was integrated.

The last two elections have been close, but there are no reliable independent electoral polls for Ghana this time and both sides say their own polls put them narrowly ahead.

The ruling National Democratic Congress (NDC) is also yet to launch its manifesto but says government investments in infrastructure have helped citizens..

“There is so much light at the end of the tunnel. That is the message we are going to give to the people rather than going with those phoney promises,” he said.