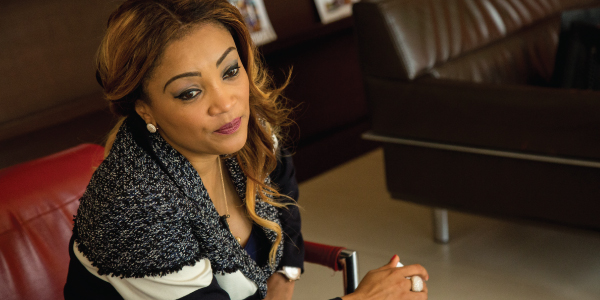 In a bid to promote the actualization of the United Nations Sustainable Development Goals (SDGs) No. 5 and 10, which are Gender Equality and Reduced Inequality respectively, African Leadership Magazine recently had an exclusive and extensive discussion with Daniele Sassou Nguesso, a trained optician, social entrepreneur, Chairperson of Sounga Foundation and author of the book, Gender and Development in the Republic of Congo: Promoting Gender Equality for Growth.

Daniele who traced her enterprenurial journey to chance, stated that, she found success in enterpreneurship while solving problems. In her words, ” …I tried and I try every day to chart my path and to achieve what I’m doing. I became an entrepreneur almost by chance. I have been granted an optician degree that allowed me to work for a large glasses french brand. With that experience, I started my entreupreunial journey in Gabon where I was at that time the first woman optician. The first store of my brand was settled down and has quickly developed in a market where I had little or less competition. This is how I was able to multiply the shops in Gabon and in several African cities. While developing my business, I could not remain insensitive or blind to some of the social injustices experienced by the most vulnerable people such as children and women I met every day on the street. So I created the association Le Petit Samaritain for Children in 2008 and the Sounga Foundation for Gender Equality in 2015. The latter is currently leading, in addition of lobbying actions with public decision-makers, 3 major projects that are the Sounga Nga female incubator; the annual Sounga Focus Group to have permanent data on the situation of Congolese women; the Sounga Gender Label which is a ranking of companies that integrate the most women and, lobbying actions with public decision-makers…”

She strongly believes it is essential for women to be recognised as full members of their society. In her own words, she explained that, “It is important for our girls to receive the same training like our boys; so that they can pursue the same jobs opportunities as their male peers.”

When asked about the inspiration fueling her drive for gender equality advocacy, she stated, “The desire to defend gender parity came from the acknowledgement of the various inequalities that prevail between women and men in the Congo and elsewhere. These inequalities are not set in stone…We cannot neglect such a human resource when we know that its contribution is a key one for the country’s development.”

Daniele Sassou Nguesso who will be receiving the AFRICAN INSPIRATIONAL FEMALE LEADER OF THE YEAR AWARD, during the East African business Summit & Awards on the 20th-21st July, 2018 in Rwanda, remains one of the continent’s leading lights in business and gender equality advocate taking her message to global platforms to attract attention to the plight of women in Africa.

The full interview will be available in our August 2018 edition of the Magazine. It would also be syndicated online, after the release date.