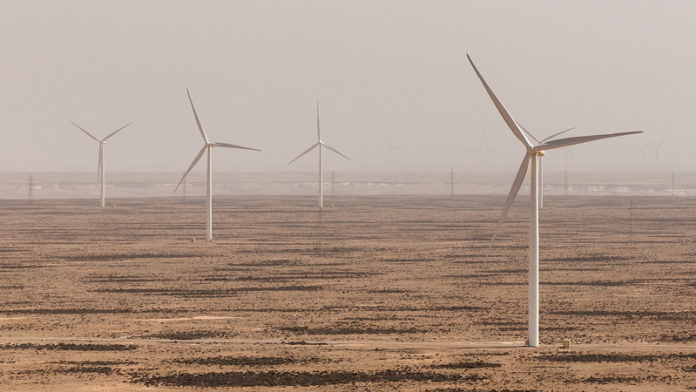 The Midelt wind farm is the first part of the 850 megawatts Integrated Wind Project (PEI) which includes four other wind farms, Enel Green Power (EGP) wrote in a statement on November 5.

The Midelt wind farm will cost MAD 2.5 billion and is expected to be complete in 2 years.

Morocco’s National Electricity Office (ONEE), the Moroccan Agency for Sustainable Energy (MASEN), and a consortium of both EGP and the Moroccan energy company Nareva all signed financing agreements on November 5 to start the wind farm’s construction.

The project is “financed through equity investments from shareholders as well as debt financing from ONEE,” according to EGP.

The Midelt wind farm “is set to contribute to the economic and social development of Morocco, and particularly that of the Midelt region, notably in terms of job creation and use of local services,” wrote EGP.

The Midelt farm is expected to have enough capacity to power a city like Agadir, with 500,000 inhabitants, and save 400,000 tons of CO2 emissions per year.

“With this first, important step that we are taking today, Enel Green Power will support Morocco’s energy demand and help the country meet its objective to increase power generation from renewables, as announced in its Domestic Energy Strategy,” said Antonio Cammisecra, head of EGP.

Once the Midelt wind farm becomes operational, the companies will sell the electricity produced to ONEE for a 20-year power purchase agreement.

The blades and towers of the wind farm will be manufactured in Morocco through Spanish Siemens Gamesa, the only supplier of wind turbines for the project.

The EGP and Nareva consortium was awarded the 850 megawatts Integrated Wind Project following an international tender.

The project, according to EGP, “marks a turning point in Morocco’s national energy strategy, aimed at meeting the country’s growing demand for electricity, at competitive prices while complying with Morocco’s sustainable development goals.”

“We are pleased to support the Government in achieving its goal of increasing the share of renewable energy to 52% of the country’s installed capacity by 2030,” El Hadi added.

On November 2, King Mohammed VI chaired a meeting to follow up the implementation of Morocco’s renewable energy strategy. During the meeting, the King gave instructions “to increase the initial ambitions for renewable energy to exceed the current goal of 52 per cent of the national electric mix by 2030.”