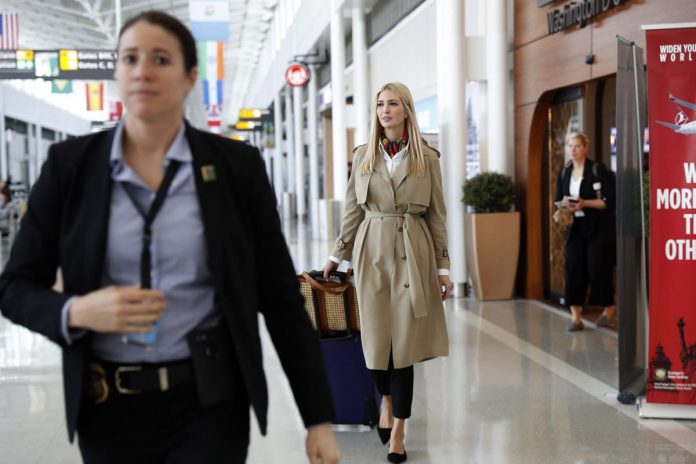 U.S. President Donald Trump’s daughter and White House advisor, Ivanka, is heading to the Ivory Coast to continue her four-day trip aimed at increasing economic opportunities for women in the West African region.

Ivanka Trump, who serves as advisor to her father on economic empowerment, began her trip to the region with a visit to the Ethiopian capital of Addis Ababa Sunday, where she announced a multi-million dollar U.S. government initiative to support women entrepreneurs.

The “2X Africa” initiative announced Monday by Trump and David Bohigian, the acting head of the Overseas Private Investment Corporation, aims to mobilize $1 billion and directly invest $350 million in companies and funds “owned by women, led by women,” or by “providing a good or service that intentionally empowers women on the continent.” Ivanka Trump attends the African Women’s Economic Empowerment Dialogue meeting at the United Nations Economic Commission for Africa (UNECA) headquarters, in Addis Ababa, April 15, 2019.

Later in the day, Ivanka Trump met with President Sahle-Work Zewde. They discussed a need for reform in Africa that would lead to improved opportunity and inclusivity for women. She also held discussions on women’s empowerment with Prime Minister Abiy Ahmed, commending him for increasing the number of women in leadership positions in his government.

On Sunday, Bohigian signed a “letter of interest” with an Ethiopian company called Muya to help support the company through OPIC financing. Muya, owned by fashion designer Sara Abera, produces household products and was the first Ethiopian company to obtain membership in the World Fair Trade Organization.

Trump visited Muya on Sunday after she arrived in Addis Ababa for a summit on African women’s economic inclusion and empowerment. She was in the East African country to promote a $50 million initiative enacted by her father in February that is aimed at encouraging women’s employment in developing countries.

“Fundamentally, we believe that investing in women is a smart development policy and it is a smart business,” Trump said after sampling coffee at a traditional Ethiopian ceremony. “It’s also in our security interest, because women, when we’re empowered, foster peace and stability.”

Trump also laid a wreath at an Ethiopian Orthodox church to honor the victims of last month’s Ethiopian Airlines crash that killed all 157 people on board. It was not immediately clear if the controversy that surrounds the U.S. president will follow his daughter to Africa. The president has not been kind in his remarks about Africa and its migrants.