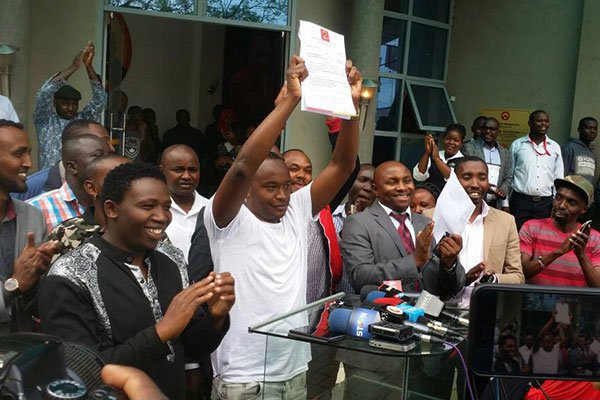 The tribunal overturned the earlier results showing that current MP Maina Kamanda had won the primaries. Tribunal chairperson Faith Waigwa said there was “compelling evidence” that a returning officer altered the musician’s results.

“Based on the evidence adduced before us by the complainant, whom the respondent could not substantially rebut, the Tribunal finds that the complainant’s evidence on the alteration of his results garnered at the tallying centre is so compelling that it is clear that he had won in the nominations”.

“Accordingly, the Tribunal hereby overturns the results as declared by the Returning Officer Starehe Constituency declaring Maina Kamanda as the winner, and declares Charles Njagua Kanyi as the winner and candidate of the Jubilee Party, and hereby directs the National Elections Board to issue him with a nomination certificate,” Ms Waigwa announced.

On Tuesday, Mr. Kamanda had appeared at Jubilee House in Nairobi to defend his win, only to be followed in the evening with claims that he had lost to Mr. Kanyi.

Ms Waigwa said Wednesday, that there had been a lot of alterations of results, including adding a figure after the declared results.

Mr. Kanyi argued his vote had been stolen and that goons “forced the hand” of the returning officer to change the results to his disadvantage. The results were announced at Jamhuri High School, and chaos erupted immediately after forcing the police to intervene.

“I have no personal problems with Mr Kamanda – the only bad thing he did was to try rigging the vote,” said Jaguar.

ODM nominated Steve Mbogo, a flamboyant young man who will now fight with Mr. Kanyi for the ultimate seat in the National Assembly on August 8.

Mr. Kanyi accused Mr. Kamanda of refusing to read the mood of a “generational change” on the ground and asked him to retire.

The decision was reached even as Mr. Kamanda disputed it without saying what his next move would be.

Ms. Waigwa however declined to attribute the anomalies to Mr. Kamanda and the MP will therefore not be fined or punished for the irregularity.

The musician’s victory now makes for an interesting race in Starehe, where young people have earned tickets from their respective parties.

Speaking after being declared the winner, Mr. Kanyi said the decision had finally vindicated him and vowed to work tirelessly for the people of Starehe once he clinches the seat in the August 8 elections.

“It is the people of Starehe who asked me to vie, so I will work for them,” he said.

He added that he holds no grudge against Mr. Kamanda.