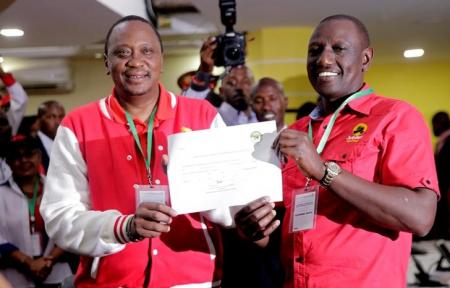 Kenyan President Uhuru Kenyatta kicked off his official campaign for reelection with a rally in Nairobi Monday, echoing a call by the main challenger Raila Odinga to avoid the violence that followed voting a decade ago.

Kenyatta led a lively procession of luxury sports utility vehicles around the city to reach the rally held after the electoral board cleared his candidacy for the August poll.

“We are determined to ensure that we conduct our elections peacefully,” the president told the crowd. “We have no intention to insult, obstruct, or abuse our opponents … Peace now, peace during and peace after the election.”

Odinga, the veteran opposition leader who held a similar rally on Sunday after his fourth run for the presidency was officially approved, also said in a talk with journalists that the campaign and voting would be orderly.

Many Kenyans are concerned about possible election-linked violence. More than 1,200 people were killed in 2007 after Odinga called for protests following the vote that year and later degenerated into ethnic based violence.

Odinga narrowly lost the 2013 elections to Kenyatta and challenged the result in court. He did not call for protests that time and a judge upheld the result, handing Kenyatta a five-year term.

Kenyatta, the wealthy 55-year-old son of the country’s first president, is running on what he presents as his record of aggressive economic development drive, citing new roads, expansion of the electricity grid and a new Chinese-built railway linking the port of Mombasa to the capital Nairobi.

The head of the Jubilee party says he has strengthened the judiciary, reformed the electoral commission and overseen the devolution of power.

But his government has also been rocked by scandals and strikes by doctors and university lecturers, and has not convicted any senior officials of corruption.

Jailed for eight years in 1982 after a failed coup, the self-declared leftist was one of Kenya’s longest serving political prisoners. He ran for president in 1997 but lost. After the violence following the 2007 vote, he served as prime minister from 2008-2013 in a power-sharing government.

The opposition National Super Alliance, known by its acronym NASA, nominated him as its candidate in April.

Seven other presidential candidates have been cleared to run for president.