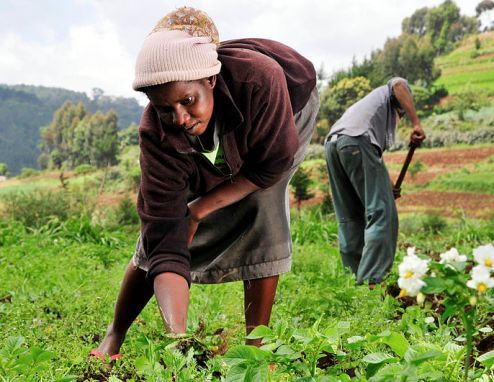 When the Kenyan government announced five years ago that coal deposits had been found in the Mui Basin, a land of rolling hills and pristine forests east of Nairobi, local farmers hoped the discovery would help transform their livelihoods.

But as villagers prepare to leave their loamy, fertile soils to make way for the multimillion-dollar mine and power station development, many households fear they will miss out on compensation because women do not have titles to their land.

Traditionally, Kenyan society is patriarchal and ownership and decisions on land management or disposal are made by men.

The villagers’ situation reflects the predicament of thousands of women throughout Kenya who head their households but are not named on land ownership documents.

Around 30,000 households will be affected by the proposed coal mines in the Mui Basin, said Alex Nganga, leader in the local county assembly.

There are no definitive figures for how many local families are headed by women, but it is known that there are many.

“We were anticipating that women would be listed in title deeds as co-owners or joint owners of land,” said Kasyoka Malonza, a Mutito community representative in the Mui Basin.

“It’s unfortunate that we have not been recognized despite all our efforts,” she said.

According to the Federation of Women Lawyers (FIDA), Kenya now has a raft of progressive laws aimed at ensuring gender equality but customary laws continue to limit women’s rights to land and property.

The Land Registration Act, introduced in 2012, includes provisions for joint tenancy and gives wives a legal right to land that is held in the other spouse’s name where the woman has contributed either in financial terms or through her labor.

This is despite figures that show that around 32 percent of households are headed by women and that they are responsible for nearly 90 percent of the farming work.

A report on gender issues and the effect of coal mining in the Mui Basin prepared last year with Canadian government support also highlighted the need to ensure fair compensation for land for women who live in polygamous households.

The coal-rich Mui Basin covers around 500 square km and is located around 270 km (170 miles) east of Nairobi. It has been divided into four sections for mining development.

The east African nation hopes that coal from the $2 billion power plant will not only help supply Kenya’s cement and steel industries, which import large volumes of coal, but also save on foreign exchange by cutting import costs. Surplus electricity will be sold into Kenya’s national grid.

George Kariithi, director of the Great Lakes Corporation, a Kenyan partner of the Fenxi Mining Group, said the company could not comment on the issue of land compensation and ownership rights.

“We have left that for the government to handle,” he told Reuters.

A spokesman for the National Land Commission told Reuters that questions on land titles and the mining development must be referred to the Kitui County government.

But an official for the county said he could not comment, as it was a matter for the Land Commission.

Christine Kalikanda of the advocacy group Center for Human Rights and Civic Education (CHRCE) said the group was working in the Mui Basin as well as many other areas of Kenya to teach women how to ask for their property rights.

According to local residents, however, there has been very little interaction between the mining companies and local communities.

Activists say that the government itself has not been forthcoming either and communities still have no idea where churches, markets and water points are to be relocated.

Simon Mutui of the campaign group Kenya NGO Council said widows and single parents are particularly worried, as they have no legal claim to their land at all.

For Mutito community representative Malonza, the answer lies with the Kenyan government.

“It should guarantee women’s rights both for ownership and the equitable division of assets,” she said. “We want to see that even women in polygamous families get an equal share.”