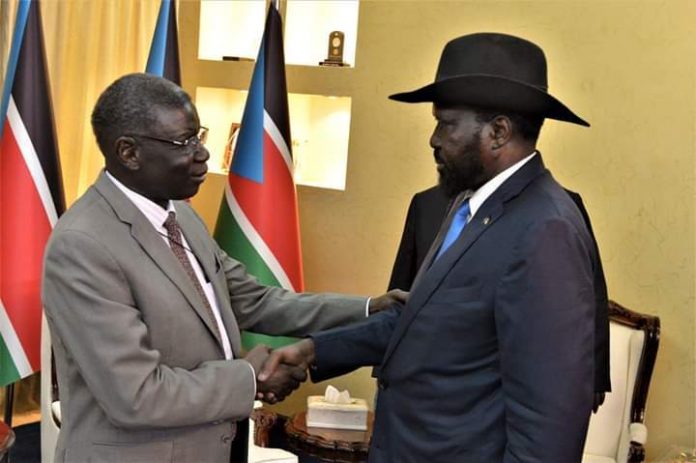 South Sudan President, Salva Kiir Mayardiit, on Tuesday met the Deputy Chairman of the SPLM-IO, Henry Odwar, who is also the deputy chairperson of the National Pre-Transitional Committee (NPTC) tasked to carry out preparations for the oncoming transitional period.

The South Sudan Presidency announced in a statement that the meeting was also attended by the Presidential Advisor on security, Tutkew Gatluak who is also the Chairman of the NPTC.

“This morning H.E. President Salva Kiir met with the deputy chairperson of SPLM IO Henry Odwar, who also serves as the deputy chair for the Pre-Transitional Committee. The meeting was also attended by the Presidential advisor on Security Affairs Hon. Tut Gatluaknow,” the presidency said in a statement seen by the Nyamilepedia.

According to the Chairperson of the National Pre-Transitional Committee Tut Gatluak, the high-level meeting focused on the implementation matrix for the Revitalized Peace Agreement.

“Tut Gatluak urged the public to embrace and support the peace deal as a major step in ending the suffering of the people in the Country,” the presidency said.

The statement also said the Deputy Chair of the Pre-Transitional Committee, Henry Odwar, appreciated President Salva Kiir for his tireless efforts to bring peace and stability in the country.

He also added that the SPLM IO is fully committed to the implementation of the peace agreement.