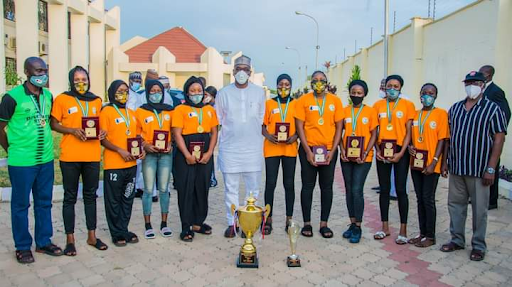 In preparation for the National U-18 and 21 Handball championship scheduled to take place as from March, the Governor of Kwara state, Abdulrahman Abdulrazaq on Tuesday, February 9 2021, visited the handball court in Ilorin which was under renovation to run an inspection.

The Governor disclosed that Kwara state was going to be fully ready to host the National competition as it is dedicated to ensuring an earnest preparation for the upcoming event.

In his statement he said, “For handball, we are going to hold a National Championships in March and we are trying to prepare for that.

“We want to be ready for the event because our girls are the champions of the U-21 championship and women’s champion of the Prudent Energy Handball League too.”

Appreciating the Governor’s efforts in ensuring the success of the competition, Sam Ocheho, the boss of the Handball federation, noted that the competition was going to be the first tournament of the year and it would go a long way in putting the state on the Handball map in the world.

“The Governor has shown his love for the game of handball. He was present at the 2020 Prudent Energy Handball League in Abuja to support the Kwara Adorable Angels and the handball family. I am optimistic that Kwara State will return to it’s rightful place in the sports world” he said.