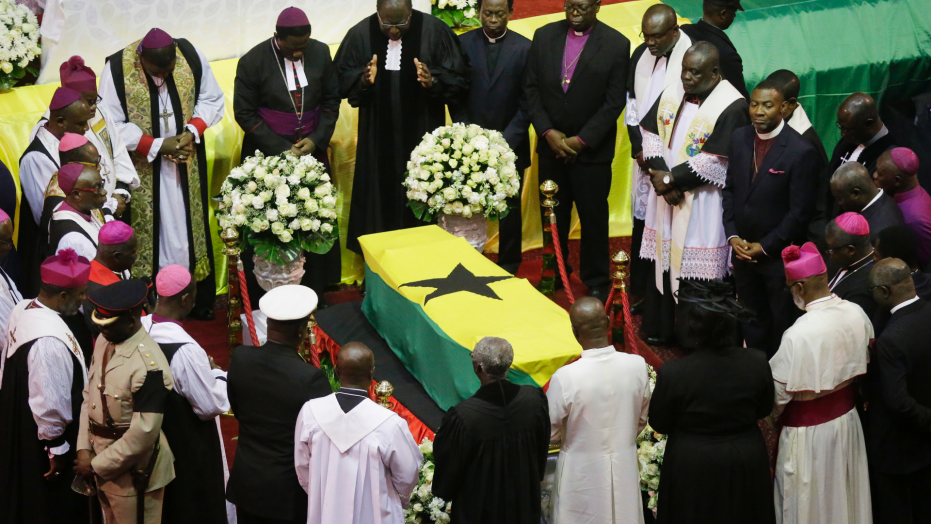 ACCRA, Ghana – United in sorrow, world leaders and international dignitaries came to Ghana to pay their last respects to the late United Nations Secretary-General Kofi Annan who was honored with a state funeral Thursday, as many lauded him as an exceptional man and leader.

Annan died on Aug. 18 in Bern, Switzerland at age 80. The grandson of tribal chiefs, he was the first black African to become the U.N. leader and was awarded a Nobel Peace Prize.

Presidents from across Africa joined Guterres, Annan’s family and many others in a ceremony that concluded two days of viewings.

Gutteres said the late Annan “was an exceptional global leader — and he was also someone virtually anyone in the world could see themselves in: those on the far reaches of poverty, conflict and despair who found in him an ally; the junior U.N. staffer following in his footsteps; the young person to whom he said until his dying breath ‘always remember, you are never too young to lead — and we are never too old to learn.'”

Guterres, who was selected by Annan to be the U.N. High Commissioner for Refugees, spoke of the honor of working with him to weather “many of the same global storms.”

“The world has lost a standard-bearer of global cooperation. The United Nations has lost an embodiment of its mission,” he said. “Now that I occupy the office Kofi once held, I am continually inspired by his integrity, dynamism and dedication. To him, indifference was the world’s worst poison.”

Even after serving as secretary-general he continued to work on the front lines of diplomacy, said Guterres.

“He helped to ease post-election tensions in Kenya, gave his all to find a political solution to the brutal war in Syria and set out a path for ensuring justice and rights for the Rohingya people of Myanmar,” said Guterres.

Ghana’s President Nana Dankwa Akufo-Addo said Annan was bold and never gave up on what he believed in.

“Despite the unjustified attacks on him, trying to fix him with responsibility for the genocides in Rwanda and Srebrenica when he was head of U.N. peace operations, he never lost his moral compass, as he showed when he stood up to the might of the United States of America when she was embarking on the ill-fated intervention in Iraq.”

History has vindicated Annan, said Akufo-Addo, saying that his “epic but unavailing effort to establish the supremacy of international law over the actions of even the world’s greatest power won him the admiration of all right-thinking persons.”

He said, Kofi Annan was an ardent believer in the capacity of Ghana and the continent of Africa to chart its own path of progress.

Annan’s wife, Nane “thanked God for giving her such an extraordinary human being,” while his daughter Ama Annan Adedeji said her father “was one of the most loving people l have known.”

Mourners have thronged to the conference center in Accra, where his coffin has been since his body arrived Monday, and where the funeral was held.

A private burial follows at Accra’s Military Cemetery, with full military honors and a 17-gun salute.