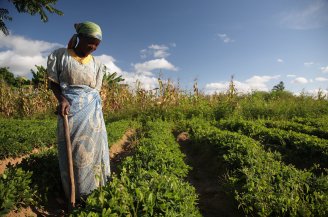 Officials in Malawi say they are on high alert for a possible invasion of army worms which have attacked crops in neighboring Zambia. The country is spraying pesticides in an effort to halt the spread.

Army worms are caterpillars that feed on green pastures and cereal crops like maize, a staple food in Zambia and Malawi.

Figures from the Zambian Disaster and Management Mitigation Unit released Monday show that nearly 90,000 hectares of maize fields have been affected across the country.

Permanent Secretary in the Ministry of Agriculture Julius Shawa told local radio Monday efforts to control the spread are under way.

“We are very much on top of things. The measures that have been taken are procurement of chemicals, which are being distributed to various districts where the army worm outbreak is throughout the country,” he said.

An army worm attacks maize crops in a province in Zambia. (Courtesy – Derrick Sinjela in Zambia)

Shawa said the government has dispatched 15,000 liters of pesticides to help contain the worms.

But observers are concerned any delay in controlling the outbreak may hurt the crop yield for 2017.

A journalist based in Lusaka, Zambia, Derrick Sinjela, says the army worms’ invasion does not pose a serious threat to the country’s future harvests.

“The food security is assured in the sense that army worms are not widespread and the fact that the government has put these [control] measures [in place] shows that the harvest [is] still going to be achieved,” Sinjela said.

But farmers in neighboring Malawi are worried.

Nearly half the population of Malawi is dealing with food shortages, caused largely by the El Nino weather pattern, which caused floods and drought in the past two years.

Phillip Kapwenga is a farmer in the Mchinji district which borders Zambia.

“Whenever the army worms invade the neighboring district we are sometimes affected and it means our maize production will be low; as a result we will face another food shortage situation,” Kapwenga said.

Malawi’s Minister of Agriculture George Chaponda told VOA the country is ready to deal with any caterpillars that may spread from Zambia.

“We think we can definitely manage [the possible army worm spill over]. We have pesticides which we can deal with it. And we have been able to deal with such issues in the past,” Chaponda said.

A year ago, Malawi successfully contained an army worm invasion that affected seven districts across the country.