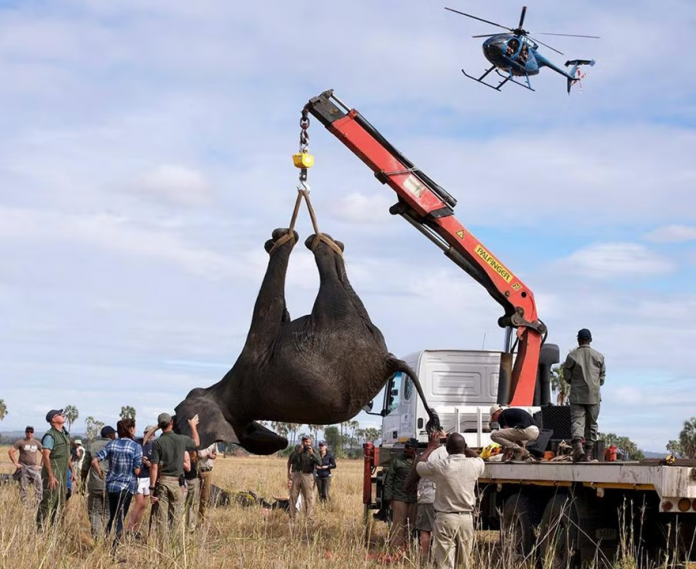 Malawi’s government and conservationists have announced plans to move 250 elephants from a park in the country’s south to a central one that has lost nearly all its population to poaching. But communities living near the park fear the new arrivals could lead to greater human-wildlife conflict.

The month-long exercise starts Monday when the animals will be transported approximately 350 kilometres by road from Liwonde National Park in southern Malawi to Kasungu National Park in central Malawi.

Brighton Kumchedwa, Malawi’s Director of National Parks and Wildlife, said that in addition to boosting Kasungu’s elephant population, the relocation will minimize human-wildlife conflict in the communities surrounding Liwonde.

He said there are currently about 600 elephants in Liwonde, twice as many as the park was intended to hold.

Malawi’s Director of National Parks and Wildlife Brighton Kumchedwa says that problems of human-wildlife conflict have been addressed. (Lameck Masina/VOA)

Malawi’s Director of National Parks and Wildlife Brighton Kumchedwa says that problems of human-wildlife conflict have been addressed. (Lameck Masina/VOA)

“The elephants in Liwonde have exceeded the carrying capacity of the park,” he said. “Now what is happening in the destruction of the habitats, as they go about looking for food and water. And also, at the same time human-elephant conflict whereby people have been killed, and their property damaged. So, now one way of minimizing that problem is to have these animals relocated.”

The International Fund for Animal Welfare (IFAW) supports the transfer of elephants. It says Kasungu National Park was home to about 1,200 elephants in the 1970s.

The population drastically declined because of poaching, with only 50 elephants left by 2015. Since then, anti-poaching efforts have helped boost the population back to 120.

“Looking at Kasungu to be the center of tourist attraction to the country, we thought that by bringing more animals in the park, including elephants, and in the future, we are thinking of bringing the big five; there are already leopards there,” he said. “So, we are talking about lions and other species associated with that.”

But communities living near Kasungu fear the new elephants, which will triple the park’s elephant population, may lead to more human-wildlife conflict. Rosemary Banda, a small-scale farmer at Linyangwa village in the Kasungu district, is among wary residents.

“We worry that the presence of many elephants here would contribute to food shortages because elephants have in the past been destroying our crops,” she said. “There was a time when elephants destroyed my crops and left me without enough food as a person who relies on farm produce for survival.”

Allaying local fears, Kumchedwa said the government has constructed a 40-kilometre-long fence in Kasungu to prevent the elephants from entering villages.

“If well maintained, it’s an effective barrier,” he said. “You don’t get elephants frequently going into the community. But also, to support that when these animals get dropped into Kasungu, some of them will be collared for easy monitoring. But also, we have teams for both on-ground and aerial support so that we give real-time protection to the communities should these elephants be breaking off.”

Malawi undertook one of the largest elephant relocations in history in 2016 when 520 elephants were moved to repopulate the Nkhotakota Wildlife Reserve.