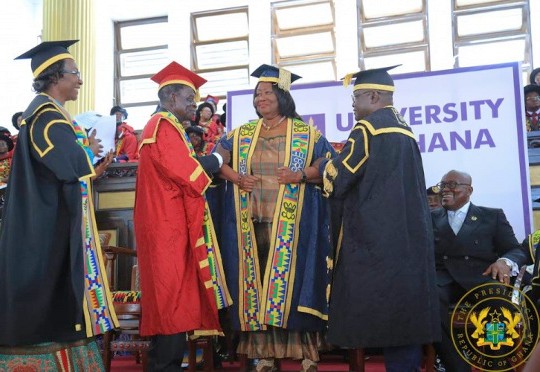 Mrs Mary Chinery-Hesse has been appointed as the Chancellor of the University of Ghana.

The former Chief Advisor to President Kufuor takes over from the Former United Nations Secretary General, Kofi Annan, to become the first female and 10th Chancellor of the institution.

President Akufo-Addo who inducted her into office charged her and other tertiary institutions to devise means to accommodate the projected increase in the number of applicants as a result of the free Senior High School (SHS).

Mrs Mary Chinery-Hesse was a Chief Advisor to former President Kufuor. She was also the Vice Chairperson of the National Development Planning Commission and a member of the Board of the Centre for Policy Analysis. This ensued after her sterling service at the United Nations. It is therefore not surprising that the University Council after a rigorous process chose Mrs Mary Chinery-Hesse as the first female Chancellor of the University of Ghana and the 10th.

Mrs Chinery-Hessey has promised to regain the glorious image of the University.

President Akufo-Addo congratulated Mrs Chinery-Hesssy on her elevation to the high office of the Chancellor. He tasked her and other universities to find ways to take in more students that may arise as results of the implementation of the free SHS.

Old students of Wesley Girls High School as well as Alumni of Volta Hall made presentations to Mrs Chinery-Hesss.