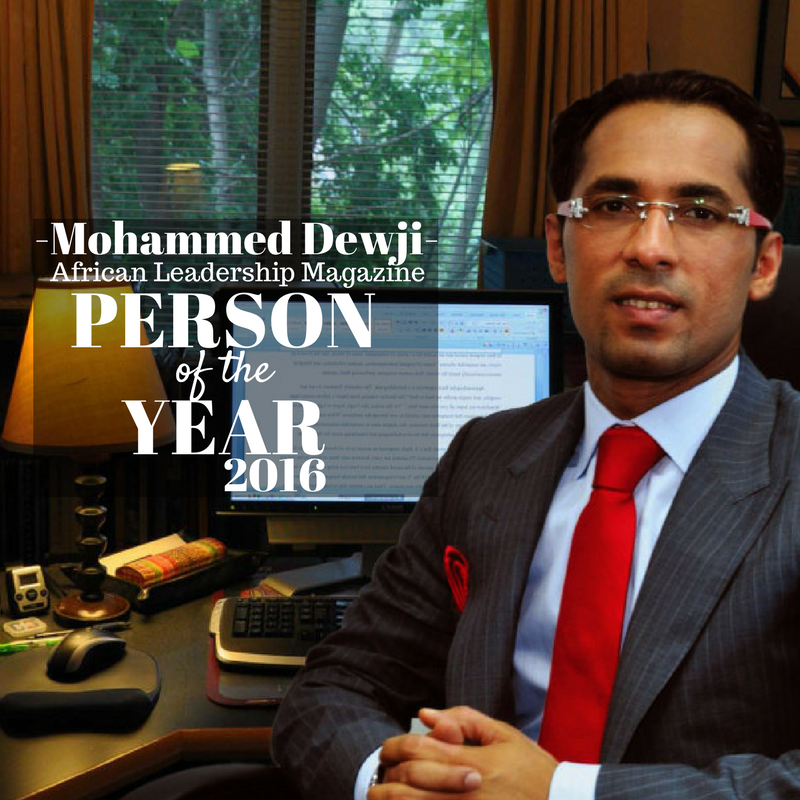 LONDON, United Kingdom / Abuja Nigeria
20 January 2017
Mohammed Dewji, Tanzanian, and President of MeTL Group has emerged winner of the keenly contested African Leadership Magazine Person of the Year 2016.  Mr. Dewji, a leading philanthropist in Africa, secured a comfortable spot as the winner of the poll with 60.8% mark, ahead of His Excellency John Dramani Mahama, the immediate past president of the Republic of Ghana, who polled 30.2% to maintain a spot in the second place. The African Leadership Magazine Person of the Year 2016, attracted over 89055 visits and was viewed by over 2.1 Million online and offline subscribers to the African Leadership magazine platform.
The announcement was preceded by an evaluation of votes and documents which were sent through other sources, by the board and the selection committee, made up of distinguished African Business, Political and diplomatic leaders. His emergence from a shortlist of distinguished Africans that included Strive Masiyiwa, founder, ECONET Wireless; Chris Kirubi, Philanthropist, Kenya; Akinwumi Adesina, President, African Development Bank; Cyril Ramaphosa, Deputy President, South Africa; and Aisha Mohammed, Nigeria’s Outgoing Minister of Environment &  UN Depuy Sec. Gen Designate was approved after a painstaking review of votes, testimonials and supporting materials by the board and the committee.
In arriving at this decision, the advisory board placed a very high premium on Mr. Dewji’s commitment to job creation. According to the Chairman, Amb. Joe Beasley, “Mr. Dewji’s commitment to job creation strikes at the very core of Africa’s major problem, which is unemployment.” With Africa’s ballooning young population, which is expected to double by 2020, business leaders have been charged to rethink their strategies towards creating jobs to absorb the growing number of the unemployed in the continent. The board further stated that “Mr. Dewji, is no doubt one of Africa’s showpiece and have continued to do the continent proud,” adding that “he has contributed immensely through his business interests in depopulating the unemployment market – creating wealth and jobs for the teeming unemployed young people on the continent.”  Mr. Dewji who only recently pledged to create about 100,000 jobs in the next four years within the continent, was also commended by other members of the board.
The Publisher of the Magazine, Dr. Ken Giami, while speaking, maintained that “Mr. Dewji is better suited at the moment to advise governments on job creation in the continent, especially because of his serial successes in business and youthful disposition.
Mr. Dewji would be honored and formally decorated with the prestigious medal during the African Leadership Magazine Person of the Year 2016 gala dinner billed to hold on the February 24th March at the Southern sun Hotel, Pretoria, South Africa.  The Forum would also be used to honor other nominees and leaders, whose commitment to excellence has been impressive.
Past recipients of this prestigious award include; Dr. Mo Ibrahim, founder, Ibrahim Prize for Leadership, 2010; Liberia President Ellen Johnson Sirleaf, 2011; H.E. Atiku Abubakar, former Vice President of Nigeria  2012; Xavier Luc-Duval, Deputy Prime Minister of Mauritius & Minister of Finance (2013) H.E. President Jakaya Kikwete, former President of Tanzania, 2014; His Excellency President Goodluck Jonathan, the immediate past president of Nigeria, 2015.
The African Leadership magazine Person of the Year is an annual award reserved for one distinguished African, who is considered to have blazed the trail in the year under review. A shortlist of nominees are selected from a survey conducted via our online and offline platforms, which is then forwarded to the selection committee and the editorial board for final consideration, selection, and approval.
For More information, please visit www.old.africanleadership.co.uk or send an email to editor@old.africanleadership.co.uk
For Press enquires
+234 7036387724
Kingsley@old.africanleadership.co.uk
ABOUT AFRICAN LEADERSHIP MAGAZINE
The African Leadership magazine is published by African Leadership (UK) Limited, a company registered in the United Kingdom (Company No. 07435198). The magazine focuses on bringing the best of Africa to a global audience, telling the African story from an African perspective; while evolving solutions to peculiar challenges being faced by the continent today. Since its maiden edition, African Leadership Magazine has grown to become a leading pan-African flagship leadership-focused publication read by over 700, 000 targeted international investors, business executives, government policy makers and multilateral agencies across Africa, the Middle East and Asia, Europe, and the US. It is distributed at major international and African Leadership events around the world. The magazine has over 1,000,000 subscribers online and offline and a virile readership on other traditional and nontraditional platforms. It is a niche and unbiased African voice born out of a desire to ameliorate the lots of Africans by focusing on individuals and corporate bodies that are known for their legacy-based approach to leadership. We believe in building sustainable leadership in Africa through the exchange of ideas in tandem with global best practices.