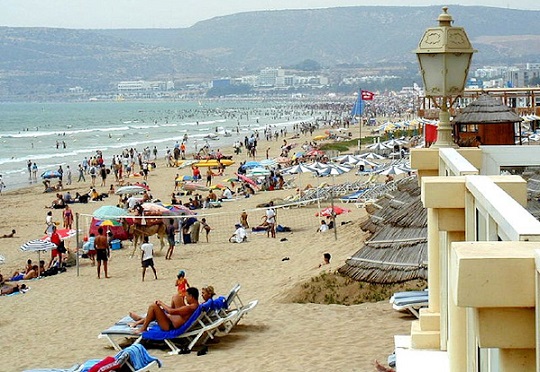 According to the July issue of Africa Tourism Monitor 2018, recently published by the African Development Bank, the continent earned $36.2 billion in revenue from 62.9 million international visitors in 2016, compared to 17.4 million in 1990 – a sign of a significant upturn.

This issue analyses the most recent data on the impact of tourism on the economies of Africa.

Morocco topped the list, with more than 10 million arrivals for the fourth consecutive year, a symbolic threshold that South Africa crossed for the first time in 2016. These two countries, located respectively at the northern and southern tips of the continent, are the undisputed leaders, clear ahead of the rest.

Tunisia, which placed third in this ranking, receiving 5.72 million visitors in 2016, is followed by Egypt (5.26 million) and then Zimbabwe (2.17 million)

While three of these top five destinations are in North Africa, Sub-Saharan Africa emerged as the region with the highest new growth, according to the report: international arrivals grew by 8.9% in the region from 2015 to 2016.

Looking beyond the top five, several Sub-Saharan African countries seem poised for take-off, even if the numbers are modest. One of these is Sierra Leone.

In 2016, Africa only accounted for 5.1% of the record  1,239 billion tourist arrivals worldwide,  way behind the Asia-Pacific region, for example, which attracted 24.7% of global arrivals, and only a little ahead of the Middle East, which saw 4.1%.

Tourism generates income and employment. The sector is bursting with opportunity for Africa, but states need to invest, particularly in youth employment. In 2016, the tourism sector helped the continent earn $36.2 billion in earnings, despite a 7.7% drop compared to 2015.

The figures tell the story. The travel and tourism sector accounted for 22.8 million jobs (direct and indirect and across the continent in 2017, 17.2 million of which were in Sub-Saharan Africa.

However, in terms of overall numbers, Nigeria, Egypt, Morocco and South Africa offer the most tourism-related jobs – between 700,000 and 1.2 million.

The number of hotel projects mushrooming over the continent is also good news for the sector. Africa’s dearth of hospitality facilities has attracted large hotel chains. Marriott Group is planning 200 hotels, with 37,000 rooms, for 2026, according to Alex Kyriakidis, its Chief Executive Officer for Africa and the Middle East.

Still, Africa’s performance in tourism can only be described as modest compared with its international competitors – the continent attracts a mere 3% of worldwide tourism revenues.

African tourism is still in the early phases of its development. According to the World Travel and Tourism Council, tourism is expected to contribute $269 billion to the GDP of the continent and create 29 million new jobs by 2026. By then, it is hoped, African tourism will have gained ground and be well on its way to a thriving and stable industry.