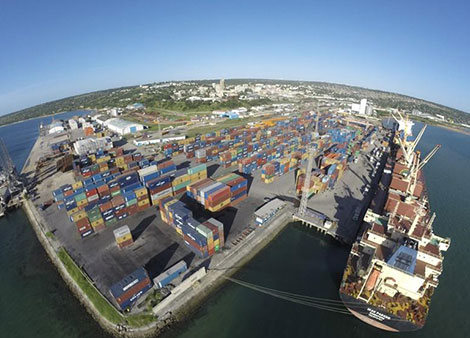 Mozambican Transport Minister Carlos Mesquita on Wednesday laid the first stone for the rehabilitation of the northern port of Nacala.

The rehabilitation is financed by the Japanese International Cooperation Agency (JICA) and is budgeted at 273.6 million US dollars. The work force required is estimated at 400 Mozambicans and 56 foreigners.

At the inauguration ceremony, Mesquita stressed that the rehabilitation should not be regarded as merely economic since it would have a major social impact. “There will be direct job opportunities for 400 Mozambicans, and businesses in Nacala will be stimulated since the work will require the provision of a variety of services”, he said.

The Bay of Nacala is regarded as the best deep water harbour on the east African coast, and it never needs dredging. It contains two ports – the mineral port at Nacala-a-Velha, used mostly for coal exports, and the much older general commercial port of Nacala.

Nacala has already undergone emergency rehabilitation between February 2014 and September 2015, thanks to a Japanese grant of 32.6 million dollars.

Mesquita said that with the new rehabilitation the port will be able to handle 250,000 containers a year rather than the current 170,000. Ships of up to 120,000 tonnes could dock at the port.

Mesquita predicted that Nacala would become a nodal point on maritime transport routes facilitating access to the markets of eastern and southern Asia and of the Middle East. “Nacala will come to figure on the map of the most competitive ports in the region”, he said.

JICA representative Hirokaki Endu expected the project to strengthen Nacala’s role among the main ports of sub-Saharan Africa. “The challenge now is launched to all stakeholders to guarantee fluent implementation, based on cooperation and harmonisation”, he said