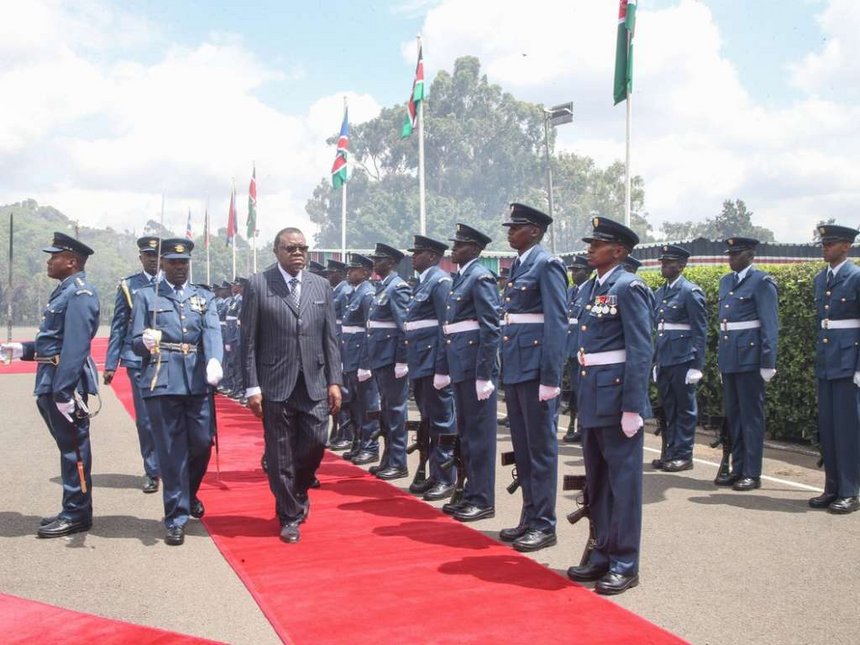 Namibian President Hage Geingob will be the chief guest during Mashujaa Day celebrations at Bukhungu Stadium in Kakamega on Saturday.

President Uhuru Kenyatta made the announcement during a joint press conference at State House on Friday.

Geingob pledged to deepen trade and investment ties between Kenya and Namibia.

“Let us deepen our trade, elevate our cooperation and educate our people,” he said.

“With the support of other multilateral connections, Africa will continue with its established economic growth and development.”

The Southern African Development Community chairman said he will push for investment strategies and economic growth of all African countries.

He lauded President Uhuru for building the standard gauge railway, saying it will make a huge impact on Kenya’s economy

“Kenya now has the best transport and logistics network in Africa due to Port of Mombasa and the SGR,” he said.

Geingob invited Uhuru to Namibia to receive an honorary award on behalf of Kenyan citizens and the late President Mzee Jomo Kenyatta.

“He [Jomo], during our struggle, as we were setting up our offices gave us donations,” he said.

Geingob also thanked Kenya for its contribution in improving the health sector in its country.

“Health professionals from Kenya have assisted in our medical centres in Namibia,” he said.

Geingob asked all African Presidents to come together to restore peace and eradicate hunger.

The Namibian Head of State and First Lady Monica arrived in Kenya on Thursday.

They were received at State House by President Uhuru and First Lady Margret on Friday.