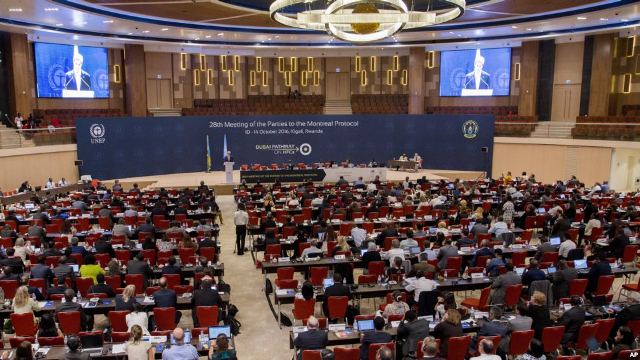 Nearly 200 of the world’s nations reached a historic agreement Saturday to reduce greenhouse gases used in refrigerators and air conditioners; this is a major step in the fight against climate change.

The agreement to reduce hydrofluorocarbons, or HFCs, was announced at a climate meeting in Kigali, Rwanda. HFCs can have an effect that is thousands of times greater than that of an equal volume of carbon dioxide when released into the atmosphere, according to the U.S. Department of Energy.

In a statement, President Obama called the pact among 197 nations and governments “an ambitious and far reaching solution to this looming crisis.”

“It shows that we can take action to protect our planet in a way that helps all countries improve the lives and livelihoods of their citizens,” the president said.

“It’s a monumental step forward,” said U.S. Secretary of State John Kerry, who was in Kigali for the conference.

The accord divides countries into three groups with different time frames for starting their reduction of HFCs. The U.S. and most of Europe have committed to reducing their use of the gases incrementally, starting with a 10 percent cut by 2019 and reducing 85 percent by 2036.

Two groups of developing countries will freeze their use of the gases by either 2024 or 2028, and then gradually reduce their use. India, Iran, Iraq, Pakistan and the Gulf countries will meet the later deadline.

Some wealthy nations have already begun reducing their use of HFCs.

“The global phase-down we have agreed today could knock off up to half-a-degree of warming by the end of the century,” said Miguel Arias Canete, a commissioner with the European Union.

Some countries, especially those already feeling the effects of rising sea levels due to a warming planet, hoped for a more ambitious plan to reduce HFCs.

“It may not be entirely what the islands wanted, but it is a good agreement,” said Mattlan Zackhras, a representative from the Marshall Islands.

Factory-made hydrofluorocarbon gases, or HFCs, were introduced decades ago as an alternative to ozone-depleting chemicals, but turned out to contribute to global warming.

Their danger has risen as the sales of refrigerators and air conditioners have soared in emerging countries like China and India. Air conditioning is responsible for the largest growth in HFCs, according to the Berkeley National Laboratory, which estimates another 700 million air conditioners will be in use by 2030.

“Over time an astonishing array of countries – from the largest developed and emerging economies to the most poor and vulnerable states – united to take this bold step to tackle the common threat of climate change,” said Andre Light of the World Resources Institute, who is also a former climate change advisor for the U.S. State Department.