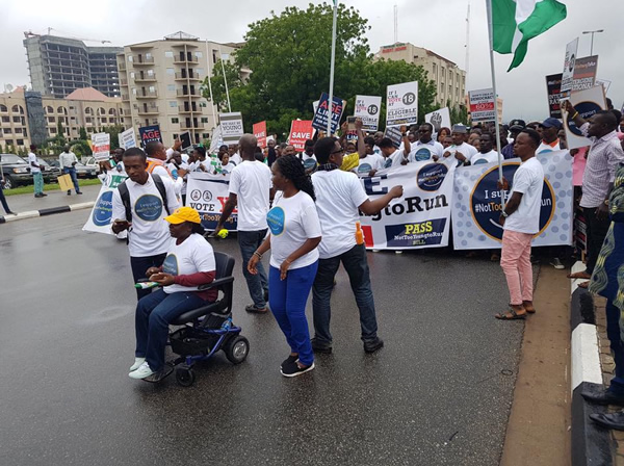 On Tuesday the 25 of July 2017, a large number of young Nigerians rallied towards the country’s parliament in the capital city of Abuja, seeking the removal of the age limit on political positions in the across the country, including the presidency.

All dressed in white T-shirts labeled “#NotTooYoungToRun”, they marched towards the national assembly shouting that they are not too young to run.

Although these youths are aware of  Nigeria’s 1999 Constitution which states that the presidential position is only open to candidates from the age of 40 and above, while senatorial and state governors position considers aged 35 or above, they have considered this an unfair judgment.

The leader of the group Samson Itodo told AFP that they demand a two-thirds majority in the 109-seat Senate and the 360-seat House of Representatives to vote in their favour.

“For us, we are saying remove the age limit completely. If you are eligible to vote, you should be eligible to run for office,” he said.

Another member of the protest Hamzat Lawal said that they are campaigning for an equal right to politics and good governance.

“If they (lawmakers) don’t vote today, let us sleep at the National Assembly so that they know that we are serious that young people count,”

“We must ensure that this legislation sees the light of the day,” he added.

Meanwhile, in response to the protest, Senator Dino Melaye, representing members of the upper and lower chambers of parliament, promised these young Nigerians that the issue will be resolved since an attention had been given to the situation previously.

“There is already a proposal that will be debated between today (Tuesday) and tomorrow (Wednesday) in the National Assembly in the ongoing constitutional amendment,” he said.

“House of Representatives and State Houses of Assembly have been reduced from 30 to 25. This is the proposal that we are going to debate.”