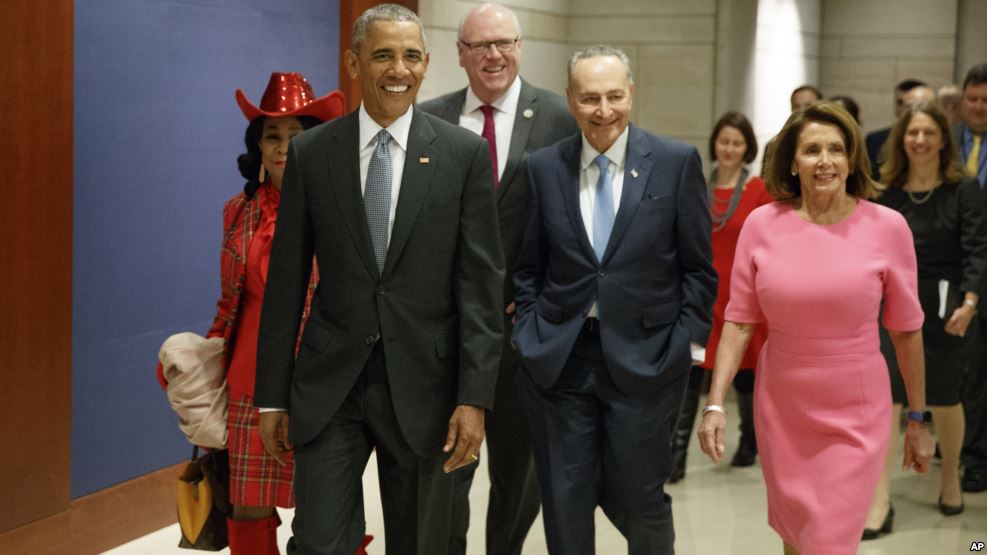 U.S. President Barack Obama is on Capitol Hill Wednesday to rally Democratic lawmakers to protect his landmark healthcare legislation. Vice President-elect Mike Pence is there too, to talk with Republicans about their agenda, which includes repealing the program frequently referred to as “Obamacare.”

The dueling meetings highlight one of the major upcoming battles as the White House transitions from Obama to President-elect Donald Trump.

“The first order of business is to repeal and replace Obamacare,” Pence told reporters Wednesday.

“We have a plan to replace it, we have plenty of ideas,” House speaker Paul Ryan said.

The Affordable Care Act passed Congress in 2010 when Democrats had control of the House of Representatives and the Senate, as well as having Obama in control of the presidency. On January 20, that concentration of power shifts back to the Republicans.

Trump has called Obamacare a “lousy” program that costs far too much, and while he has not laid out specifics of a plan to replace it, he has made it clear he wants to. He continued to criticize what he called the “failed Obamacare disaster” on Twitter Wednesday.

White House spokesman Josh Earnest told reporters Tuesday that Obama would be discussing with Democrats how to counter the Republican goal of repeal.

“The President has long been open to the idea that if there are Republicans who are genuinely interested in reforming the Affordable Care Act in a way that would strengthen the program, the president would be strongly supportive of that effort,” Earnest said. “But that’s not what Republicans have offered.”

A focus on the contrasting policy positions of Obama and Trump will likely be on display next week when the president gives his farewell address, followed the next day by Trump’s first major news conference since being elected in November.

He had planned to talk to reporters in December to detail how he would address potential conflicts of interest involving his business, but that meeting was postponed.

It is not clear how much he will speak about the issue, though that may depend on what questions he is asked. Trump has said he will leave the business in control of his adult sons and other executives.